The Chalk Closet - 30 Tales to Give You Goosebumps #21 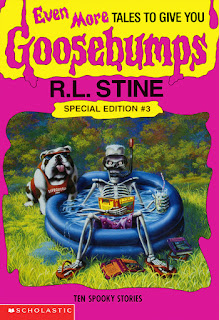 We are now on the home stretch. We are on the 3rd book of the 3 book collection of 30 Tales to Give You Goosebumps. This section is called, of course, Even More Tales to Give You Goosebumps. The first story, which I'll be covering today, is called "The Chalk Closet." I don't know what is scary about chalk or a closet where presumably you keep chalk but I guess I'm about to find out.

Travis is a bit of a slacker and as a result winds up at summer school. It's no fun for a lot of reasons: the place is run down, most of his friends aren't there, but the biggest reason is probably the teacher Mr. Grimsly. He is a no nonsense dude. You screw up, and he'll send you to the chalk closet. At first this doesn't seem like much of a punishment. Then, each kid who gets sent there never seems to come back. It was just one or two kids... but then more and more were disappearing. Are they getting kicked out of school or is something more sinister happening?

Travis begins to worry. He tries calling up classmates who have disappeared but there is no response. He has a math test he has to get an A on or he'll wind up in the chalk closet too. He tries his best to study, he really does. Then the test rolls around and the teacher announces everyone's grades to the class. He goes down the list, a bunch of A's for all the students... but then Travis. D. It's the chalk closet for him. He considers fleeing but Mr. Grimsley reads his mind, announcing that the doors are locked. There is no escape. He is shut inside the chalk closet all alone... or is he? He sees the familiar faces of his missing classmates, along with many more he doesn't recognize. They are ghastly visages with their hands up over there ears. Travis wonders why then hears the sound. The chalk screeching across a chalkboard. The sound he'll hear for the rest of eternity. 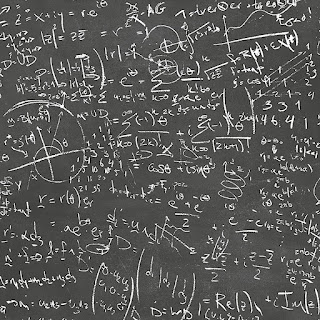 I am going to venture a guess. I think R.L. Stine thought screeching chalk on a chalkboard for eternity would be a funny punishment to dole out to some kid, and then engineered a story to make it happen. Do I think he was successful? Well not entirely.

Firstly I think there are some things missing. Perhaps due to short story format, perhaps due to laziness, I dunno. I feel like the protagonist needed to show some more resistance to what was happening. He needed to tell his parents, or tell the principle, or something. Then you can have the "I don't believe you" or even more sinister the "I'm in on it too" Imagine if the whole system was designed to trap kids for eternity. Spooky. The kids all just seem resigned to their fate. Usually there is at least some attempt to figure out what's going on or avoid the problem. Yes he does call the missing kids, but that's it. It's like the bare minimum he could do. I don't know, maybe I'm asking too much.

So what does work? Well the idea of your classmates being marched off one by one and then disappearing forever is kind of creepy. Because it's summer school it is a familiar enough environment because you are used to school, but ever so slightly out of your element. Things are just different enough to feel "off" already. Summer School is a big enough bummer already. But then you add a punishment which already sucks, and make that punishment be eternal? Scary yo.

I would consider this a "middle tier" short story from this collection. I don't think it stands out the most, but it is also not utterly terrible. I kinda wonder if kids nowadays even know what chalkboard screeching sounds like. They all use whiteboards and digital shit now don't they? Perhaps you'll have to demonstrate the sound when you read this to your kids...

Rating: 3 agonizing sounds out of 5

As per usual I'll be posting another short story review tomorrow in this month of Goosebumps. Tomorrow will be "Home Sweet Home," a story whose title doesn't sound particularly spooky. Check back then and see if maybe R.L. Stine stuck a nice wholesome tale in this book by mistake.