The Thumbprint of Doom - 30 Tales to Give You Goosebumps #30 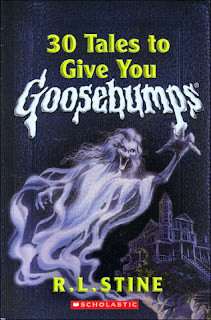 It's finally here! It's Halloween and that means it's time for the final review of 30 Tales to Give You Goosebumps. For the grand finale I'll be reading "The Thumbprint of Doom." It's a title that doesn't inspire a lot of fear, but does cause a little bit of curiosity. How does a thumbprint cause doom? Does it link you to a crime scene? That's pretty scary. Let's find out.

Trisha is not having a great summer. She wanted to spend it with her best friend Jeremy, but his nerdy cousin is staying with him. They hang out, but it's just not the same.

They all end up meeting a new girl in town named Carla. She believes in horoscopes and various superstitions. If mercury is in retrograde this chick will know it. The most horrible curse she knows is the "thumbprint of doom." She lives in fear of it, as it will cause the recipient to only have 24 hours left alive. She has many other fears as well, driving Trisha crazy by preventing her from doing fun things for silly reasons. For example, perhaps the stars aren't aligned. Reasonable in Carla's mind.

Well they come up with a plan to show Carla that her superstitions are a bunch of bullshit. They drag her to the local carnival and into the fortune teller's tent. Carla's future is distressing. Clear on her forehead is... THE THUMBPRINT OF DOOM! Carla is distraught but the gang let her in on the joke. Carla lets them know she is well aware it was a joke. It had to be a joke because only Carla herself has the power to bestow the thumbprint of doom. It is a horrible power to bare and one she lives in fear of. Now though, her new friends know her dark secret. This she cannot allow, and thus gives them each the thumbprint in doom. Naturally they run in terror. In their absence the fortune teller lets Carla know it was a rather mean prank to play on them. Carla figures they will figure it out in a bit and they can all laugh about it. Then she lets the fortune teller, her mother, know that she'll see her at home later. The end. 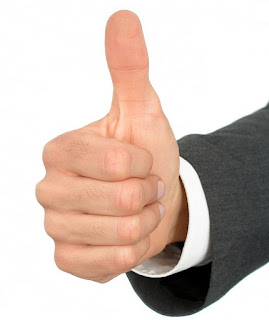 This is a unique Goosebumps story and I will tell you why: there are absolutely zero supernatural elements to it. There is no magic, no monsters, no aliens, no nothing. Because of this I was actually fooled. I thought for sure there was going to be a twist where even though it seemed silly there actually was a curse, that Carla would actually have powers, that the fortune teller would be evil. Something! But there was nothing like that. It was all a prank, and it turns out magic isn't real. And you know what? That's refreshing! It was enjoyable, and funny. It's certainly not the outcome I would want every time, otherwise it would basically be Scooby Doo, but I think for 1 story out of 30 to end this way? Why not.

Over and over again I have lamented how after awhile Goosebumps stories were all starting to feel the same. And of course again and again I have praised stories that could offer up unique experiences. This is one of those ones I praise. It might even work so well because of the fact that Goosebumps are so formulaic. Because there is ALWAYS the supernatural element, I wasn't expecting one without. Because there are always pranks, that in the end turn out to have some real hidden horror behind them in the end. I didn't see it coming. I really like it.

Of course, some might lament that it isn't really a scary story if there isn't anything to be genuinely scared of in it. I might agree, if you are looking for a story to frighten you, this probably isn't it. At it's heart the threat of the "Thumbprint of Doom" is very silly. There are some pretty silly things in Goosebumps though, so it doesn't make you discount the fact that the threat is supposed to be taken seriously. You just can't, because it's ridiculous. But it ends up that it is supposed to be ridiculous, you can't help but smile. I couldn't anyway. So if you want a fright, yes, this is a let down. However, after a bunch of short stories that all have frights, to end like this, it's just fun.

So basically, in summation this is enjoyable but not scary. If anything it uses the fact that it is supposed to be scary to fake you out. I give it my... THUMBS up! Hardy har har.

Rating: 4 out of 5 thumbprints of doom

So there you have it. It's Halloween and I've read all of the 30 Tales to Give You Goosebumps. If I had to review the whole thing I'd say I am fairly positive about it. Yes there were a few stinkers among them. There were also some really fun stories kids could share around the campfire or at sleepovers. There were some fun ones like this to fool longtime fans. They all still pretty much felt like Goosebumps while managing to be mostly unique. We ran the full gamut of baddies from werewolves to evil teddy bears. Because of the variety I think if you like Goosebumps you'd find something to like in here. So, even if you can't track down this specific hardcover collection, I'd recommend checking out the 3 "Tales To Give You Goosebumps" books that comprise it. They are good fun.

So this was a little bit exhausting keeping up with an entry every day for an entire month. I will probably take a little break BUT I have another review of a full book ALREADY DONE. I was going to post it this month but then I decided to do this special thing for October instead. I'll release that review I have done sometime in November, probably towards Thanksgiving. To all the readers who stuck with me through this, thanks so much. I know it's a little bit silly for a grown man to be reviewing these things. I guess that's kind of the point. So anyway, I hope your Halloween was nice and Goosebumps filled.