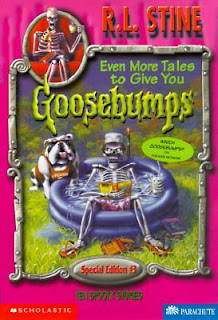 "Home Sweet Home." That's the name of our story today and it is a heartwarming sentiment. It will be interesting to see how R.L. Stine skews its meaning. I've heard from a reliable study that 90% of all spookings occur at the home. Let's see what kind of spooking resides within this story.

Sharon is a 12 year old girl with a 9 year old sister Alice. She's not particularly nice to her sister but she manages to stop being mean to her sister's dolls long enough to take her to a garage sale. The sale is at Mrs. Forester's house but for some reason she isn't even there. She just has a sign out that says to leave the money for payment on the table. Strange. But then people say Mrs. Forester is very strange indeed. There are rumors she can turn into animals. Alice finds a little lamp she'd like to buy for her doll house. Sharon looks around absently, and picks up a nice bowl. When she notices there is a big gross spider on it she tosses it in a panic, shattering the dish. Does she do the responsible thing and pay for what she broke? No, she runs away. Typical.

From then on Sharon started seeing spiders everywhere. She saw one that night coming to get her in her bed. It had a white stripe down its back, like the one in Mrs. Forester's hair. When her parents came in to see what the commotion was all about there was no spider to be found. Next she saw the same spider coming out of the sewers on a bike ride. Finally the spider attempted to kill her by dropping a chandelier on her. No joke, this shit happened. The spider clamps on to her head, and Sharon knows who it is: Mrs. Forester. The spider lady informs Sharon that now she is a small problem. A small problem. In fact Sharon is very small indeed. But don't worry about her, she has a nice life living in her sisters dollhouse. This story has some things going for it. Old ladies are creepy. Spiders are creepy. Old ladies that turn into spiders are doubly creepy. Then ending blows it though. It is a twist ending that goes for a humorous fate rather than anything that makes sense or is scary. A common plight of the Goosebumps story.

So listen, every kid has broken something they shouldn't have and then ran away or lied about it to cover it up. If you were an OK kid you even had the decency to feel guilty about it. What if there  was a creepy spider to help you feel even more horrible about it? Spiders are scary. Except, spiders are only KINDA scary. See the thing about spiders is that they are small. You can step on them or smush them with a napkin. The fact that it is also an old lady gives it some intelligence, so it can scheme. The cutting a cord to drop a chandelier on Sharon made sense. It was a good plot development. Magically shrinking Sharon was a dumb plot development. If she had this kind of magic why bother with being a spider at all?

Also, I just gotta come out and say it, is attempted murder and permanent miniaturization really a just punishment for breaking a bowl you care so little about that you are selling it at a garage sale that you yourself aren't even present for? I mean I get she's the villain here, but come on. I feel like something of more worth really needed to be the catalyst for Mrs. Forester's vendetta.

The only thing that works about the twist is the aspect that Sharon is mean to her sister and her dolls, and then she has to live in her doll house. Don't her parents have something to say about this? Are they cool with this arrangement? Can't they just buy Mrs. Forester a new bowl or something? Or maybe spray her with some raid?

Basically this story has some ok ideas, they just don't all mesh and pan out into a decent story. He needed either up the creepy factor a little, or make the funny aspects of it actually work well. He did neither. Still if you've got a weird old lady in your neighborhood, maybe you could use this to convince your kid she can turn into a spider. Worth a try.

Rating: 2 spiders that are probably some mean old ladie out of 5

Check back tomorrow when I read "Don't Wake Mummy." Presumably a mummy will be involved. Hopefully it is better than the Tom Cruise movie.