Shell Shocker - 30 Tales to Give You Goosebumps #18 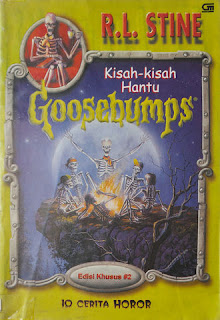 I'm tired. It's like 11 pm. I've been writing blog entries for 18 days. Let's just get on with it. Today I'm reading "Shell Shocker." Will shells be shocked? Let's find out.

Tara is quite the shell collector. Seashells that is. She's on the beach battling for seashell supremacy with her annoying brother when she decides to put a seashell to her ear. To her startlement she hears a voice. A voice that pleads with her to set it free. You see, she just has to go to a cave and she will get to see the biggest seashell in the world. What a dream come true for the seashell collector. All she has to do is follow the voice to the cave.

Sneaking away from her parents and enters the cave. It's a little spooky. It doesn't help that the walls are covered with spiders. Also the floor is covered with bones. Not to worry says the voice in a shell, those are... uhh... fish bones... from uhh... big fish. No problem. Well the urge to see the biggest shell in the world is too strong. Shockingly she finds it. More shocking is that inside the biggest shell in the world is the biggest hermit crab in the world. It clamps down on Tara as a normal sized hermit crab pops out of the shell that lead Tara to her doom. The last thing Tara heard was that crab telling it's mother what a good job it did luring her there. 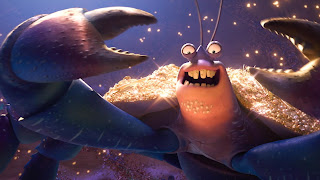 Not gonna lie, I don't know if it's because I'm tired and slightly grumpy... but I kinda think this one sucks. It goes for the "twist" ending except the twist is entirely predictable. At least it's not a twist that makes me angry for how illogical it is. Instead it makes me angry at how obvious and stupid it is.

So for the story. Well Tara is kind of a jerk at the beginning. That is really all we know about her besides her love of shells. She is a jerk to her brother and loves shells. She loves shells so much she is willing to listen to a talking shell. So she's obviously stupid too. I don't care about Tara. I won't say I'm glad when she gets eaten... I'm just indifferent.

It's really a very simple story. I could sum it up much quicker than my already short two paragraph summary. "This girl finds a seashell that tells her to go to a cave and she does which results in her getting eaten by a giant hermit crab the end."

I just can't find much redeeming about this story. It kind of feels like filler to get to the goal of 10 stories per book. Sorry Stine, I think this one is a no good.

Rating: 1 seashell to lead you to your doom out of 5

Tomorrow's story will be "Poison Ivy." I assume it's not about the DC Comics villain. But if it's about the plant... how can it be scary? Poison Ivy is much more annoying than it is frightening. I guess we'll find out tomorrow.
Posted by Shaun P. at 12:00 AM