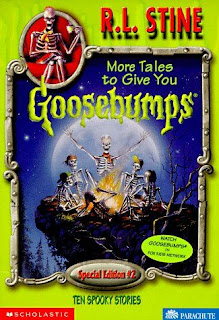 Another day another tale. Today I'll be reviewing "P.S. Don't Write Back." Is this about a pen pal that has really been a ghost the whole time? That's my only guess. Let's see if I'm right.

Home Run Dave is the humble name of the protagonist of this one. He's spending his summer at Camp Timber Lake Hills. As his name would suggest, he is the star of the camp's softball team. Not everything is perfect for ol' Dave though. While usually he receives lots of letters and care packages from his family, he has yet to get any mail whatsoever.

He tries to solve this situation by checking it out with some people at camp. He even tries to call home but that's only for emergencies. His efforts are not in vain though. The next day he gets a letter. It just doesn't happen to be the letter he expected. It's a rather short note that basically says they are not going to come and visit him on visiting day, and is followed by the title of this story, "PS Don't Write Back."

How could this be? What has happened to his family that they would treat him so badly? They always come visit! Things don't get better with the next letter. It says that they are sending him to live with his Great-Uncle John. But he lives in a nursing home!

A call home merely gets the answering machine. Because of this he ends up late for the camp scavenger hunt. How can he worry about a scavenger hunt at a time like this? Getting prepared for it, he notices that the address on the letters is for Camp Timber LANE Hills, and not Timber LAKE Hills. That's the name of the camp across the lake. Who the hell makes two camps with such similar names right next to each other? Regardless, he is convinced he has someone else's mail.

This problem is SO IMPORTANT Dave has to solve it right now. He "borrows" a boat and rows across to the rival camp in search for the kid who bares his name. This camp is somber, and a gaunt bony boy greets him by merely pointing towards a door when asked about this other Dave. Other Dave is also haggard, and rather terse. When asked about the letters, and informed that our main Dave shares the same name, this other Dave quickly tells him to leave before the others find out.

Good enough reason to leave I guess. Besides this place is weird. The kids at this camp are all swaying an moaning by the campfire. And then one of them grabs Dave ushering towards the fire, making motions to throw him in. This seems like a good time to break free and run the fuck away. Dave does so. Smart Dave.

Back at his own Camp Dave tells a counselor about it. Problem is, Camp Timber LANE Hills burned down 30 years ago. Oh well, they'll figure it out tomorrow. Just before going to sleep for the night, Dave takes one last look at the letter he got. There was one strange detail he never noticed before. It was postmarked July 10.... 1964. 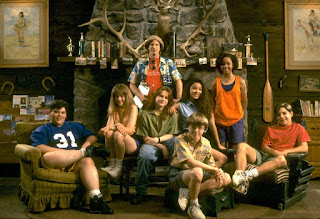 Since I've been so focused on these damn twist endings lately, lets get this out of the way... This twist ending actually worked. Like, I'm not saying it was amazing or anything but it worked in the way that scary story twist endings generally work. Upon hearing the ending it didn't make you rethink the story and go "wait, no, that's bullshit and doesn't add up." Yes it was sort of a "they were dead all along" which is a very overused trope in these things, but it was effective and not horribly horribly dumb.

So anyway, off the ending topic... This is another one about Camp. I wonder if these are all going to be about camp. On the cover art it depicts a camp setting. Camp is definitely a classic setting for horror, but it might get played out after 10 stories. I'm hoping the next story takes place somewhere else.

Of course, I could definitely see this being read around a campfire. I am not sure if it would scare the pants off the kids, but it does give a decent amount of spookiness. Encountering the dead without even being aware offers its own kind of unique terror. This follows the trends of a lot of horror stories that have come before it but it's in a nice modern environment and made accessible to 90s kids.

This would be a fun one to share with friends in a tent at night or at their very own summer camp. Perhaps they'll find out that their own camp has their own legends. I never went to camp, but I bet each camp invents some sort of mythology. Why not? Scaring kids is fun! R.L. Stine made a career out of it!

Rating: 3 out of 5 tents that are probably filled with dead kids or something

Thanks for sticking with me this month. Tomorrow I'll be reading "Something Fishy." Will it continue with the camping theme but this time be out fishing on a lake? Maybe they'll catch a ghost fish. Ooooo! Check back tomorrow to find out.