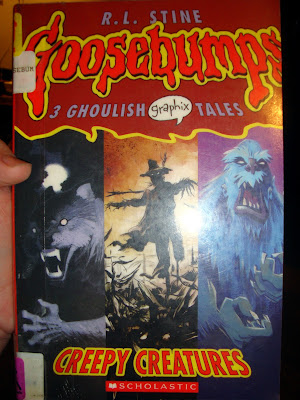 Yes yes, I am FINALLY updating again and you will notice this is a little bit different than the original series book I claimed I was going to cover next. Instead I got sidetracked by Goosebumps the graphic novel! Turning Goosebumps into a comic book makes an awful lot of sense, and this one promises 3 ghoulish tales.

This came out in 2006 which was about 10 years after the original series finished. I believe it came out sometime between Goosebumps 2000 and Goosebumps Horrorland. Interestingly though after 2000, all 3 stories in it are from the original run. There were 3 of these "graphix" adaptation books done in all. And that concludes the paragraph of stuff I looked up on a wiki to know wtf the deal with this is.

So you got your 3 unique monsters on the cover. The stories here are The Werewolf of Fever Swamp, The Scarecrow Walks at Midnight, and The Abominable Snowman of Pasadena each adapted by a different illustrator. I got a used copy of this off of amazon that apparently came from the Mastics-Moriches-Shirley Community Library. Amusingly (to me) the sticker on it says "Goosebum" with no P. Hah hah. Bum.

Anyway 2 of these stories I've already covered in novel form. The third I intend to if I ever motivate myself to actually read these damn books. I presume the stories won't deviate too much from the source material so I won't spend a lot of time recapping the stories. Just a simple synopsis. 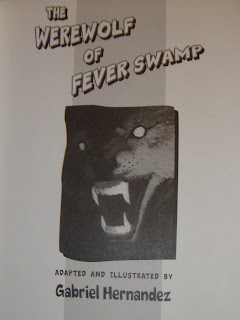 Story #1: The Werewolf of Fever Swamp

So these kids get forced to move to Florida due to their parents having a dubious swamp deer experiment. There are some new friends there who tell them that fever swamp got its name due to a historic plague there. At night, Grady the lead boy hears howling which is pretty predictable for a book about a werewolf. The presumed culprit of this noise is found in the morning and is a very large but seemingly friendly dog. Also there is a swamp hermit. Why not. After some barking, mischief and dead animals, naturally the dog is getting a lot of heat. Could the dog be the werewolf? Also there is that weird hermit, is he the werewolf? Nope, it's Grady's new friend Will who proves he' a shitty friend by chomping on Grady. The dog saves em, but as we see in the end, Grady becomes a werewolf ultimately.

Gabriel Hernadez who adapted this story apparently has illustrated several children's novels, as well as doing art for a Clive Barker graphic novel. His art style is somewhat serious and while not photo realistic or anything it has a certain "real" quality. Some of the art even succeeds in being creepy, as with the weirdo swamp hermit, or frightening like some bad ass scenes with the werewolf. 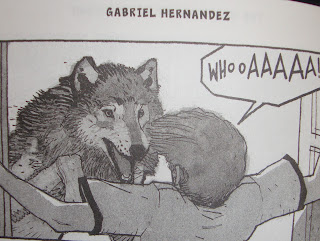 Sadly all the comics here are in black and white. While I understand it would probably cost more to print in color (and thus price themselves out of the market for kids) it would have been nice to see full color Goosebumps. That being said, black and white has a certain charm to it. It also has a nice association with horror, going back to the classic Universal Horror films such as the Wolfman which undoubtedly had some influence on Stine's writing.

Now it's been awhile since I've read this book, but from my memory (and a glance at a wiki synopsis) the script of this comic stays pretty true to the book. Naturally in this medium and with the length it is at (40-50ish pages) it probably had to cut some stuff but I couldn't pick out anything specifically they missed. 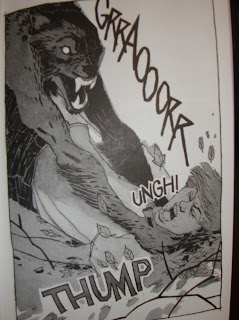 I think this was a pretty good story to start out the book with. Werewolves are a pretty familiar monster, and this story is a little less odd or... dumb... than many of 'bumps. Good pick for a comicization. 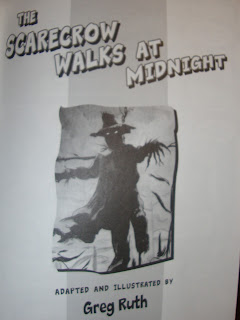 A pair of siblings are visiting their grandparents farm. Stanley, the hired farmhand who is a bit... well uhh, how to put this in a politically correct world... Slow? Is slow acceptable to say? He's not so thinky. How about that? Well anyway he's superstitious fellow who followed some dubious instructions to make a shit ton of scarecrows. Apparently they even walk, though that just seems to be Stanley's son playing a prank. What a rascal. After his prank goes wrong the kids fall from their horses with minor injuries. It's payback time and the siblings plot to scare Stanley's son Sticks by dressing up a scarecrow themselves (how original) but in a twist of fate the scarecrows really do come to life and sticks ends up saving them! Stanley freaks out and tries to get them to obey him, but they think Mark, the brother dressed as a scarecrow is their leader (I didn't know sentient scarecrows had a hierarchy.) The clever solution of having him pull his head off so they all do the same didn't work, but trusty old fire does the trick. Stanley ultimately agrees not to use his scarecrow knowledge again but doesn't give up on the superstition book. Hey, what's the matter with this teddy bear??!?!

Greg Ruth does the art here and it is rather detailed and has a realistic feel. The shading and details can give off a rather creepy vibe. Not even just the monsters. Some of the facial expressions, especially from Stanley are subtly eerie. That added to the fact that everyone is acting just a little bit tense makes for some suspense. It is probably my favorite art of the bunch though maybe youngsters would prefer something cartoony? 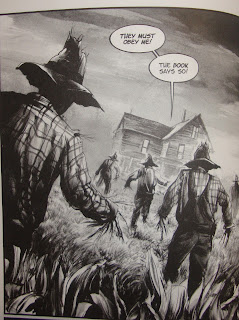 Also, ultimately the scarecrow threat isn't that frightening to adult me, but perhaps 9 year old me would have been more spooked. I, however, am pretty confident in my ability to defeat a straw based lifeforms. I have been well versed in how to do so from the Wicked Witch in the Wizard of Oz. Though even without fire I gotta believe even magic straw doesn't have that much mass to overcome. A strong breeze should be able to do the trick. 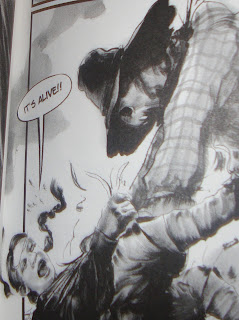 Now I know before I said it was a shame these weren't in color. I might amend that statement for this one. I feel like being in black and white is actually an advantage. The details and darkness in grey scale really make for a great horror atmosphere. It almost feels like it is too good for the admittedly simple and not great story line. I could almost imagine this being an old b-movie.

Shrek Story the Third: The Abominable Snowman of Pasadena 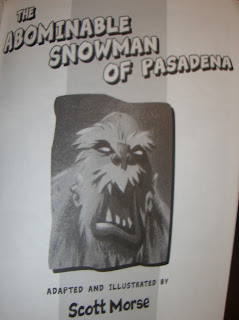 See now I haven't reread the novel version of this yet so oh man SPOILERS! So anyway, two siblings (why it is always two siblings?) go to a place they weren't before (Alaska) and my isn't this formula feeling fresh? Apparently the Abominable Snowman has been discovered and since iphones weren't a thing yet they need the kids dad to be a photographer for it. Father of the year award to bringing your kids to a yeti photo shoot. Nothing could go wrong. Their sled guide thinks the kids shouldn't be there. How unreasonable! Well of course the kids get lost alone, and fall into a pit with a frozen yeti. But he is apparently alive and likes trail mix. Once they get their dad to follow em there ol' Abomi is frozen again in a convenient chunk to ship back home to Pasadena. Naturally the kids show their friends and it ends with a magic snowball being thrown that freezes one of them which can only be healed by WARM ABOMINABLE SNOWMAN HUGS! After this the beast runs off into the sunny California wilderness. Dad is bummed but at least he has his pictures... But wait, none of the pictures actaully have the Snowman in them. Drat! 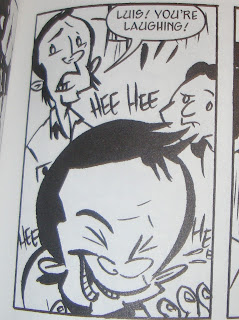 Scott Morse the illustrator here has a vastly different style than the other two artists in this book. It's very stylized and cartoony. While this is nice for a change of pace I am not a huge fan of the style. Now it's done just fine skill wise but I just don't dig the way it looks. Maybe it's the eyes. For some reason the eyes are just blank circles. No pupils. It's weird,but not in a good way. Even though the Abominable Snowman drawing is relatively bad ass, it's just kind of hard to be "scared"

Now I remember the novel of this story being at about the point I stopped reading Goosebumps as a kid. In addition to just getting "too old" for these stories, the formulaic nature of them and the fact that it was the 38th freakin' book just wore me down. If these comic versions weren't so short, I'd say the same thing had happened to be by story 3 of the book. 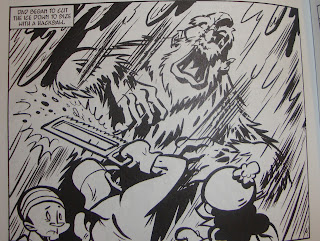 Still, I guess there are some key deference even if we are sticking to a formula. They took us to some very different locals. A swamp, a farm, and here the frigid arctic. The monsters are each relatively different. In fact that is probably the key reason Goosebumps has gotten away with making so many books. Just keep plopping out new monsters. As each bit of this adaptation is pretty short, it was pretty easy to plow through.

Now overall, this book as a whole? I think it was a pretty good experience. I think a comic version of Goosebumps is a pretty swell idea, and it was executed about as well as could be. Having 3 stories in one collection is a win for kids with only so much allowance to spend. I could see this being a good introduction for kids to the series, or a nice companion piece for kids who already like Goosebumps.

I am curious to read the other 2 graphic novels they released. Of course first I am planning to FINALLY get back and review one of the original series books. Sorry again that I am so lazy. I have been meaning to update this blog for months. I've got a stack of unread Goosebumps to get to, and I will really try to do so. Until then, thanks for reading. 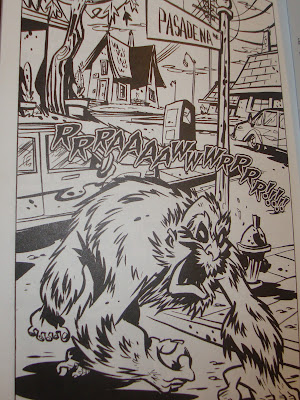