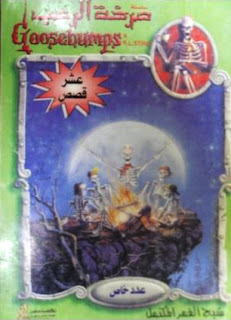 Ah, I see you've returned... or maybe you're here for the first time. Welcome. I'm about to review the 17th story in 30 Tales to Give You Goosebumps called "The Cat's Tale." Cats are an icon of Halloween. Black ones mostly. They're often associated with witches. I assume it's because all witches are all barren spinsters. Other cats seem scarier to me though, especially hairless ones. I think it's weird that witches will sell their soul to the devil but can't abide by a tabby cat. Choosy choosy. Anyway, enough random rambling, lets see what the story is all about.

Maria's family moved from the big city to the country. While her brother enjoys it, she prefers the hustle and bustle of New York. These feelings are strengthened when a thunderstorm knocked out the power to their house. That night a ferocious beast attacked her through the window. It turns out to simple be a stray cat. A BLACK cat. Told ya.

Maria loves the new cat and names it Misty. She pampers it, and even stays home from a day of fun to bond with the cat. Soon though, things take a strange turn. Maria wakes up one night unable to breathe only to release she is being smothered by the cat! The next day she goes to the pool but is oddly scared of the water while on the diving board. She's never been afraid of the water before. Then a fuzzy black something trips her off the diving board into the water. It keeps getting weirder. She starts hearing strange whispering rhymes about how the voice will take over her body before the 9 lives are up. Oh well some tuna salad will cheer her up. Wait, TUNA? I THINK THIS CAT IS TAKING CONTROL! Theory further confirmed when while with friends Maria catches a mouse. Gross. She HATES mice.

Well enough is enough. Maria takes the cat to an animal shelter. Somehow the cat made it back to Maria though. Time to get serious. Maria puts Misty in a pet carrier and sets off to ship the cat away. It wouldn't hurt to get a soda though, it'll just take a second. WHAMMO, a truck hits the cat. The driver is apologetic but Maria is kinda fine with it.

Guess that problem is all solved. Whew. Except... she is hearing whispering rhymes again... about having 8 lives left and getting control of her body before the 9 lives are up. Oh darn. 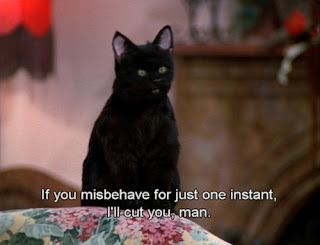 The more I read these things the more appreciation I have for stories that take something completely normal, like a cat, and make it scary. I mean, yes, it is not really scary because it is a Goosebumps book. I just like the idea of a 9 year old with a cat at home that has to give their pet a second glance before they go to bed at night because they can't help but wonder, "what if?" Finding a stray animal and wanting to keep it is a common thing in childhood. Usually the worst that goes wrong is it shits in the house or tears up your furniture.

Beyond that... man is it hard to keep finding things to say about these stories. R.L. Stine does have this thing where he seems to thinking rhyming chants are scary... I think I might have to disagree with him about that. I mean I guess "double double toil and trouble" is a witchy rhyme that goes back to Shakespeare... and if that's good enough for Shakespeare why can't a rhyming cat work for Stine. I just think there was probably a scarier way for it to come across that a cat was trying to steal her body. For one thing, it doesn't even make sense that the cat would warn her. I mean now that she knows, all she has to do is murder a cat 8 more times. If this story was full length, I bet the dead cat would keep showing up. That could be fun. It's also probably already been done by someone else. Oh well.

Tomorrow another tale, but this one probably won't have any tails. It's called "Shell Shocker" and I'm hoping it'll be about a turtle but it probably won't be. Turtles just aren't scary. Except snapping turtles. Those things will fuck you up. See you tomorrow.