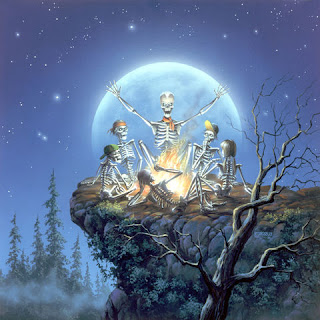 Jenny and her parents are staying at the Pine Mountain Lodge in September. They pretty much have the place all to themselves besides the owners, their son Tyler, and their dog Bravo. It's a little run down and there is no TV but it seems alright... at first.

The first night Jenny hears a voice coming from outside calling her name, asking her to let it in because it's cold outside. She frets, but apparently not enough not to fall asleep again.

While her parents are out on a hike Jenny plays with Tyler. She shares the details of her spooky night. He claims she wasn't imagining things. The voice belongs to the spirit of a hiker lost and never heard from again. It haunts the area looking for a body to take control of for one year at a time. If you let it inside it will take control of you. This amps up Jennys fears quite a bit, but her parents tell her Tyler is just playing a prank on her.

That night she is scared to go to bed, but her parents remind her the dog Bravo is outside to protect her. She hears a voice once again begging to be let in, it's cold outside. This time, however, the voice claims to be none other than Tyler. He accidently locked himself out. Whatever his claims, Jenny won't be fooled. She doesn't let him in, and hears Bravo the dog barking and scaring him away. Good dog. As a reward she lets Bravo the dog inside. He thanks her for letting him in, you know it's cold outside. 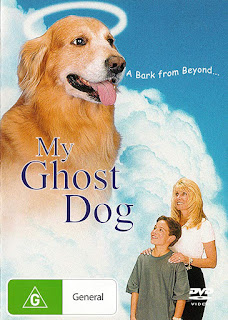 You know, Goosebumps feature a lot of monsters, evil poison ivy, green sea blobs, crazy old ladies that will turn you into a doll... but there is something so very classic about a genuine ghost story. I guess they represent our basest fears of death and the unknown.

This is a fairly simple ghost story, but it works. A young girl in a new place, nearly empty of people, unfamiliar and remote. Kids can be uncomfortable enough in a situation like this, but then they start hearing voices? Oooooo. Who hasn't thought they heard something strange at night, if not a voice, then perhaps a foot step, the house shifting, the wind. You try to convince yourself the sound is easily explainable, but in the back of your mind, you wonder. This is where the fear comes in. It usually isn't a clear voice you can make out the questions of, but there is at least a connection to real fears there.

I've described a lot of the stories in this book as "silly." This isn't one of those silly stories. I mean sure, it's hard to describe a Goosebumps tale as "serious" but it keeps a relatively unsilly tone... until the end that is.

The twist is where it gets silly, but it works as a twist. It lets the air out of the tense situation of a haunting but letting the air out of things makes a silly sound... like balloons! What I'm trying to say is that it was funny. That is a good thing. It is kind of unexpected. I mean, it is expected because this is a Goosebumps book, but it's unexpected in that it is not how one would traditionally expect a ghost story to end...

Anyway, this whole book of More Tales to Give You Goosebumps has had the theme of Summer. Lots of summer camps, summer vacations, beach time and hot weather. This story does a good job of ending this theme, happening right as Autumn begins. It makes the whole book of disconnected stories feel a bit cohesive.

So in summation, this a good old fashioned ghost story with a funny twist ending. It helps bring a close to a collection of short stories and ends things on a pretty decent note. While nothing about it screams "exceptional" it does overall give off the vibe of "hey this is pretty good."

My rating: 3 Harvest Moons out of 5

Tomorrow we start section 3 of this hardcover collection, Even More Tales to Give You Goosebumps. The first story is called "The Chalk Closet." What a weird name for a story. What is a chalk closet? Is it a closet just for chalk? Who has that much chalk?!? I guess we'll find out tomorrow. Thanks for reading.