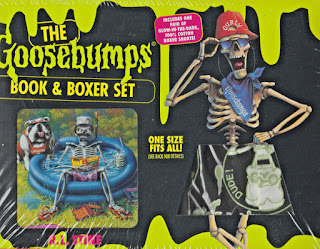 Today I'll be reading "Don't Wake Mummy." Wordplay involving mummy/mommy has long been a staple of bad Halloween jokes the world over. Well the English speaking world anyway... Well... America at least. What I'm trying to say is that kids love that mommy and mummy sounds similar. Will there be both mommies and mummies in this story? Let's read on.

Jeff's dad is a curator at the local museum. That is why a mummy's sarcophagus is delivered to their house. It seems like it should go to the museum but apparently they are keeping in in the basement for now. Jeff's older sister Kim teases him for being scared. She convinces him to go down to the basement to see the coffin and then deviously locks him down there. What a jerk. He swears he hears the chains on the sarcophagus rattling and straining to be opened and he freaks out, understandable. When his triumphant sister finally lets him free the coffin is quiet. Did he imagine it all along?

That night Jeff swears he hears the thumping and clanking of the mummy walking around their house. His mom arrives to comfort him and assure him everything is fine. It must have been a dream. This event prompts Jeff to find out more about mummies. He tries to research to no avail. Wikipedia doesn't exist yet. Then he finds a strange mystical shop and tells the owner his problems. Finally Jeff gets what he needs: 20 dollars worth of mummy dust. Guaranteed to stop mummies in their tracks. Perfect.

Of course Jeff's sister still teases him, but he knows what is up. That mummy is really coming alive. That night it happens again. You'd think he'd be all ready for it with his mummy dust, but he fumbles with the pouch it is in. His mom apparently heard the commotion and busts in. The mummies has left, and then dad shows up too. He is finally ready to believe Jeff. There were stories that the other museum that had this mummy first wanted to get rid of it because it comes to life. Those stories must be true. Dad promptly locks the basement door with a heavy lock. The mummy won't be able to get them.

Meanwhile sister Kim is in the basement. Boy teasing her brother by dressing up as the mummy was hilarious! Except now the basement door is locked for some reason and she can't get out. Oh well, she can always sleep in the basement for the night. Hey, what is that thumping coming from the sarcophagus? 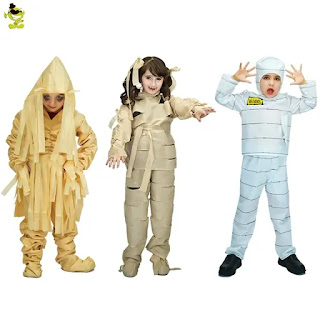 This story came dangerously close to being decent. There are some flaws that kept it from getting there though. These flaws were not so much in plot, but in writing style. The basic premise though, works pretty well. Let's discuss it a litte.

First let's talk about what works. Mummy is a quality monster. The undead are always scary. Making it mysterious and foreign like an egyptian mummy adds pizazz. The full length Goosebumps story Curse of the Mummy's Tomb (and its sequel) are focused on going to Egypt to see mummies. This story takes the unique turn of bringing the mummy home. Who wouldn't be a little freaked out with a dead body in their basement? What kid wouldn't dare another to go peak on it? These aspects work. Heck, even the aspect of his sister being the culprit works. Almost.

So let's talk about the format. This story, like the large bulk of Goosebumps stories is told in the first story. Jeff is talking about what is happening. This works, and is fine. It is a decent format for a scary short story. The problem is that when it has to discuss what is happening to his sister in the basement it has to shift perspective to her. It does so abruptly and it is jarring. Yes it has text clues to let you in that the shift has happened, but it is jarring. It doesn't work. It's disappointing because I think if he could have found another way to do it, it would have worked. Maybe do the whole story in 3rd person, that way the shift is not so noticeable?  Or perhaps find a way for Jeff to be the one who is observing what happens to his sister. For example, he could hear her screaming in the basement, and then hear the mummy.  Or he could hear her pounding on the door, let her out, and then have the real mummy be following her. Just a couple ideas.

So basically, this had potential, and ALMOST works. I'm sure a lot of people wouldn't get as hung up about the shift in perspective as I do but oh well... I'm writing the review and they're not.

Tomorrow check back for my review of the story "I'm Telling." What person has never heard a kid utter that phrase. Some of you were probably kids who told your classmates that all the time. Narcs.