Something Fishy - 30 Tales to Give You Goosebumps #13 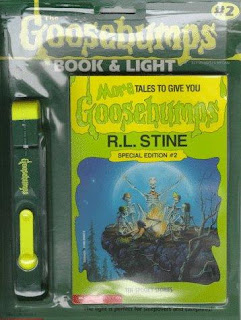 Something is Fishy with today's story... Mostly the title.... which is "Something Fishy." Judging by the general cleverness of the titles of these tales I am gonna guess there is an actual fish involve. Will they be fishing in the ocean? a river? Will there be an evil pet goldfish? The ghost of some old tuna melts? I don't know. Time to read.

Eric's summer is not panning out very well. Unlike the last couple stories there is no summer camp for him. Since his parents got divorced money has been tight so he can't go to the lake with his mom and sister. This is a shame, because it's sweltering hot out this summer and they don't even have air conditioning. Plus all of his friends are gone for the summer.

As you can see there is nothing much to do... nothing that is, except watch his pet fish and complain about the heat. He has a tank with many different species of fish. Eric ends up spending most of his allowance on various accessories for them, things like a castle and a little diver with a spear.

On night, in a bout of what can only be described bout of heat dileria, Eric beginnings swirling his finger in a figure 8 pattern in the water of his aquarium. He seems to barely be aware of what he is evening doing. At the stroke of 10 pm on the dot, he finishes his bizarre ritual and notices something odd. Eric is wet. And Small. And in his very own fish tank. Yes, it seems Eric has become something fishy.

At first this is pretty rad. He is cooling off, having fun. He doesn't seemed to be grossed out by his fish's turds. The other fish, however, are not big fans of his. A large goldfish attacks him, but he valiantly defends himself by borrowing the scuba diver figurines spear and murdering his very own pet.

With no time to really bask in his victory or lament the loss of his pet, Eric notices his mother and sister entering the room. His sister is the one who notices the dead goldfish. Mom does her duty and scoops the corpse out. Eric makes sure to get out with the ex goldfish but his family doesn't seem to notice him there. Now mom is going to perform a "burial at sea" via the toilet and Eric is a smidge worried he is going to be flushed as well. He manages to escape and when he hits the floor he magically poofs back up to normal size. This naturally startles his mom, but she doesn't seem to think too much of it.

Well things go back to normal but it still is really hot outside... And I mean now Eric knows he can get back to normal size. He prepares a bit first by walling off his own little section of the tank. He repeats the bit about making finger motions in the water and it works like a charm. Then his family enters with a new present for him. His lovely mother bought him a new pet, and look there is a walled off space just for it now. He must of known. It is a perfect spot to put his Siamese fighting fish. "The meanest fish on earth..." 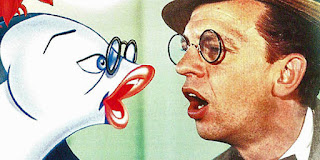 Hurray, another plot twist that isn't so terrible that it makes me tear out my already dwindling hair. But I'll get to that in a moment.

"Something Fishy" reminds me a bit of a movie I loved in my childhood starring the wonderful Don Knotts. It was called the Incredible Mr. Limpet and involved a man who wished a wish to be a fish and what do you know, he became one (albeit in cartoon form.) He himself faced many dangers, such a bigger meaner fish, and the Nazi Navy (no joke.) Ok, so I guess this isn't EXACTLY like that movie.

This story also reminds me a bit of my own childhood, because I myself had an aquarium. At one point or another I owned many of the types of fish R.L. Stine listed by name. The thing is, I didn't own them all at the same time because they aren't really fish you would have live together. They'd probably eat each other, as well as requiring different water temperatures and such to thrive... Come on Stine, do your fish homework!

I would say this is one of the stories that aims more to be fun than to be scary. It has a unique feeling because instead of facing a monster or villain instead a common pet becomes a life threatening predator. A goldfish generally isn't scary. Instead of something like the Monster Blood series which involved regular pets becoming huge and thus story, this does the opposite. A giant goldfish would be pretty cool though... but it probably wouldn't fit in a kid's aquarium.

I'd also like to point out one little detail that isn't hugely relevant to the plot but is something you don't see a lot of in Goosebumps. Eric's parents are divorced, and part of his bummer summer is due to this fact. Divorce doesn't come up awesome in 'bumps but I think it was (and is) a hugely relevant issue for kids. I've often pointed out that a strong asset these stories have is their ability for regular kids to relate to them, and details like this can help.

All in all, this story is a fun little lark. I don't know that kids will go to bed with nightmares of being eaten by a goldfish because of it... but just maybe they'll give their aquarium an extra glance as they walk by. They might even catch themselves swirling their fingers in the water seeing what may happen.

Rating: 3 deadly goldfish out of 5

Thanks for your continued reading. Tomorrow's story is called "You've Gotta Believe Me!" I can't really predict anything based off the title. Not being believed is a pretty common trend in Goosebumps... looks like it's about to be continued.