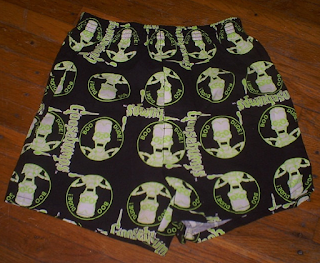 Birds can be scary. Crows are seen as signs of death. Vultures are pretty creepy looking. And who can forget Alfred Hitchcock's famous movie. Now it's time to see what R.L. Stine can do with "For the Birds". At least, I assume birds will be involved. I'll feel awfully foolish if they don't!

Kim's family is CRAZY for birds. Maybe they are just plain crazy. They do like birds a whole lot though. So much that they all went for a stay at the Bird Haven Lodge, a peculiar bird sanctuary. That is to say, it is peculiar, and also a bird sanctuary... not that it is a sanctuary for peculiar birds...

Anyway, the whole family is very into it all besides Kim. There are so many birds to see, beautiful hedges made into bird shapes, and even a hedge maze. Kim is bored out of her mind. While trying to find something to keep her busy she accidentally sit on lodge owner Mr. Dove's (ugh, a bird name) hedge pruning shears.  Mr. Dove is thrilled she found them, and asks Kim about getting revenge on her family for bringing her here. Well that's odd. Also odd that night is the massive swarm of birds outside her window. Why are they out at night? It's not like it is a flock of owls!

The next morning the whole family goes to hedge maze. Mr. Dove is there to greet them. There is even a perfectly sculpted hedge in the form of their entire family. Weird! Oh well. They do the maze and wind up in a giant bird cafe. Fun! The cage closes in around them. Not so fun. Mr. Dove is there creepy as ever and armed with his hedge clippers. Since this is a kid's book he doesn't commit a gruesome murder. Instead he snips his clippers and turns the family one by one into birds. Her parents who are constantly making out become lovebirds. Her jocular brothers become mocking birds. True to his word to help her get even, Mr. Dove turns Kim into a cat. The end. 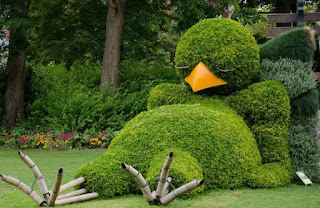 I'll be honest, this one is kind of a groaner. I was hoping this would unleash some of people's weird fear of birds, but birds aren't the weird thing here, Mr. Dove is. As it is, there isn't enough Mr. Dove for you to really get scared of him. Also, magic hedge clippers? Eh... I dunno.

What works? Well it does develop an atmosphere where you think "well this is a bit strange." You definitely side with Kim in thinking her family is a little bit crazy. The lodge is odd... but not necessarily in a way that is creepy per say. It does get you wondering about the people involved though.

Besides the family's love of birds, and their eventual turning into birds, the birds play very little part in the story. They show up at night which Kim finds odd, but that's about it. They really could have used some more odd behavior from the birds. For example, have some birds being seen acting like people, or acting more directly to get her attention. Maybe have some sort of half bird half human monstrosity that was a failed experiment from the magic clippers.

Oh man, speaking of magic clippers. So using topiaries and clippers to work magic to turn people into animals is.... weird in a dumb way. Like in an, "I can't bother coming up with something better," way. What next, a haunted lawnmower? If you are gonna have it be magic just straight out have it be magic.

Here is a more creepy conclusion to the book. Instead of literally turning them into birds, have them just be kept like birds in cages for the weird as Mr. Dove, who will treat them like birds. That is creepy and doesn't involve any magical yard equipment. Maybe R.L. Stine will let me write a story for Even More and More and More and More Tales to Give You Goosebumps. Call me, Mr. Stine!

Not the finest story in this tome of many tales. It could have been worse though. If your family is obsessed with birds, perhaps this is the story for you.

My Rating: 2 birds that used to be human out of 5

Tomorrow is the second to last story in this book called "Aliens in the Garden." I am reasonably sure that aliens don't belong in the garden. Check back then and we'll all find out what they are doing there.