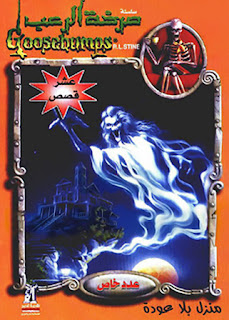 A week of Tales to Give You Goosebumps and I'm still trucking. In case you're unawares, each day in October I am reading a short story from a collection of 30 and reviewing it. Today's story is known as "Mr. Teddy."

So, the star of this book is Willa, a young girl who is rather spoiled. Her mom buys her all sorts of things for her collections like teddy bears and porcelain eggs. What kind of little girl collects porcelain eggs? Anyway, the way her mom spoils her really gets on the nerves of 11 year old sister Gina. Particularly at this very moment when Willa is begging mom for a new teddy bear that caught her eye at the store. Naturally, mom gets in and buys it for her.

It's good times with the bear at first. Mr. Teddy is his name, and he has replaced "Old Bear" as king of the castle. He gets the honored spot of sharing a bed with Willa at night. Old Bear has been dethroned. Mr. Teddy is much more soft and fuzzy.

Something weird happened the first morning after sharing the bed though. When Willa woke up, Mr. Teddy wasn't in her arms. He was across the room on her dresser, creepy eyes staring at her. She blamed Gina for the movement, which met with a firm denial with a smirking smile.

Next night the same thing happened but worse. Mr. Teddy left her bed went and smashed some of her porcelain egg collection. Gina again gets the blame. Again she denied it.

Third night Willa thought ahead. She put Mr. Teddy under the covers. Surely Gina couldn't reach under her covers and get him. In the morning Mr. Teddy was again on the dresser, this time the contents of said dresser were torn out and strewn about the floor. This actually seems like a step down from actual destruction of property to merely "making a little mess" but who am I to judge?

This is the last straw. To stop Gina this time, Willa moves her dresser in front of the door. She'll never be able to get in and wreck things up! The morning reveals just how wrong Willa seems to be. The dresser is pushed into the room and everything is totally wrecked up in there. Posters, dolls, stuffed animals all shredded and torn. Mr. Teddy, however, is standing triumphantly with doll parts in his hand.

Gina has gone too far this time! But mom reminds Willa that Gina wasn't even home last night. She slept over at a friends house. This can only mean one thing: Mr. Teddy was the culprit all along. Willa destroys him at once, ripping him apart. Good thing Old Bear is still in tact. Good old reliable Old Bear whose eyes are twinkling merrily. Good old reliable Old Bear who is thinking that after this harsh lesson he taught her, he'll never be replaced again. 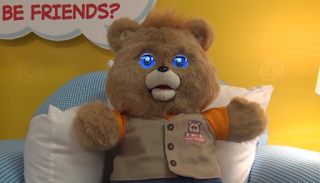 The first thing I really noticed about this book is that it seemed to be aimed at ages younger than your traditional Goosebumps story. After I thought about it a bit, I think was wrong with that initial thought. I think it is aimed at the same age group, it just seems to be ABOUT that age group. You see Goosebumps usually star 12 or 13 year olds, but are probably read by 8-10 year olds. Kids like reading about people a little older than them. It is somewhat relatable, but also new and exciting. Willa, though I don't think is explicitly aged in this story, seems young. At the very least she acts young. Getting teddy bears and talking to them is an action much more like an 8 year old than a middle schooler.

Now. I don't think there is anything wrong per say about this change. In fact, if anything I think it is kind of good to change up the usual time tested formula of Goosebumps. Long have I lamented that they all start to feel the same. The thing is, that this change makes it harder for me as an adult to enjoy. Ultimately this isn't a real problem because this book isn't meant for an adult. It doesn't increase my personal enjoyment of the story any though.

Once again we can point to some similarities to full length Goosebumps. This one seems a little bit like a miniature version of Night of the Living Dummy. This is a pretty obvious one. Inanimate doll comes to life. Sister gets blamed for the destruction it causes. Yes the general feel and whatnot is different, but it is a very similar premise. More kids can probably relate to a teddy bear than a ventriloquist dummy though. I will  say dummies are probably more inherently creepy.

Is it a very scary story? Not super bone to me, but to an 8 year old? Well it might just make them keep an eye on their teddy bear. It also might give an older sibling an idea for a prank to play on their bratty younger sibling...

Rating: 3 out of 5 evil teddy bears

Thanks for reading and check back tomorrow for my review of the short story "Click." Did it inspire the Adam Sandler film of the same name? We'll see!