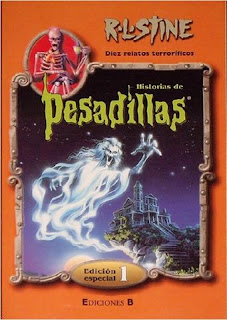 It's October 7th! A full week of these Tales To Give You Goosebumps are here now. Look at me, I did it! Well I will have done it when this review is over anyway. So where are we at? It is the 6th tale, "How I Won My Bat." I'm dying to know, what kind of bat? The animal? The sports equipment? Is there a haunted baseball bat? Let's find out in the next paragraph!

Yep, it's a baseball bat... haunted status to be determined. We do know however that middle school Michael Burns is an amazing hitter for his school team. A champion in fact. He seems to have some regrets though, now he will regale me with his story.

It started with a slump. Michael was actually a great hitter but things hadn't been going so well lately. He just couldn't seem to get a hit. Seems like he tried everything. With the big game coming up this was a huge problem. He coach was starting to doubt him.

That's when he met the strange little man. The man with the bat. Mr. Smith from the sports museum. He offers Michael a bat that will enable him to hit the ball and win the game. All he needs to do is promise to return the bat to the museum immediately after the game. Michael is skeptical but at this point he's willing to try anything.

His confidence is at an all time low when the game starts. His coach moved him in the batting order illustrating his lack of trust. It only takes 2 strikes though, before the bat proves its worth and hits one out of the park. He just keeps hitting homers too. He breaks records. His team clobbers the other team. It's a blow out.

Naturally everyone on his team is thrilled. The crowd is going wild. Reporters are there. There needs to be a celebration. But Michael remembers the promise. He's gotta return the bat. How can he go when the bat is so amazing?

Now at the museum his idea is to tell Mr. Smith he will buy the bat, or do anything he can to keep it. The museum is really great too. He's surprised he's never been to it before. All the sculptures of the sports figures are so lifelike. It looks like they have real flesh and muscle and everything. Now if you don't see where this is going, you're an idiot.

Mike tells Mr. Smith he can't give the bat back. He's gotta be able to keep it. The museum curator tells him that's fine, he just wants to see him swing one time. Mike takes position, and then in a flash it's all over. He's now part of an exhibit, frozen in place for all eternity. But hey, he does get to keep the bat. 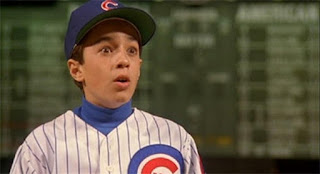 Child me probably would have enjoyed this a lot more than adult me. I used to be a big fan of baseball. Played in little league and everything. Never did get a magic bat though. Guess that's why I never made it to the majors, or apparently why I'm not a manikin in a museum now.

This is definitely a story where I think it helps to try and think through the mind of a child to appreciate it. There is no real monster, alien, or creature to get a kick out of. There is just a kids love of a sport and his desire to be the greatest, biting him in the ass.

The premise is not so far removed from fantastical sports films about young people I watched in my youth. Rookie of the Year, a freak injury causes a kid to be able to throw at major league speeds. Angels in the Outfield a young fan can see literal angels helping out his favorite pro team. Is a kid that finds a magic bat with a curse so different? Not really I guess.

I admit this isn't the greatest of stories but it's subject matter gives me warm nostalgia fuzzies in my heart even though I didn't read this one as a kid. If you remember a time in your life where you played catch at recess each day and played in little league each summer, maybe this one will make you smile. Admittedly that may not be the goal of a "horror" story, but this one just isn't scary.

Rating: 3 out of 5 cursed bats

If you're wondering what I have in store tomorrow, it's a review of the short story "Mr. Teddy." I'm gonna go out on a limb and say it's about a teddy bear. Is it a HAUNTED teddy bear? Check back and find out.