Aliens in the Garden - 30 Tales to Give You Goosebumps #29 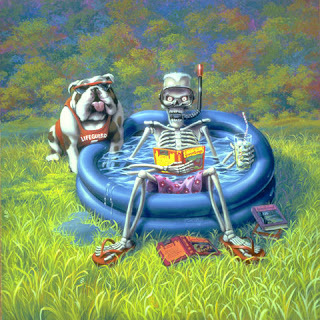 Halloween is a day away and now I'm going to read "Aliens in the Garden." Do the aliens need some basil or fresh oregano? I don't feel like writing a long intro so lets just read the damn story.

During a fierce thunderstorm 12 year old Kurt notices a strange small object in the sky get zapped by lightning. Whatever it was, it crash landed in his garden. He discovers a tiny spaceship there. How would a toy like that crash in a storm? Strange.

While going to show off his new discover to his friend Jenna he gets intercepted by local bully Flip. The teen teases Kurt and starts physical altercation. A strange blue ray stops the bully in his tracks. It turns out inside the spaceship were 3 little aliens. While they recognize Flip as a threat they seem fine with Kurt.

Jenna arrives at the scene, and after some disbelief marvels at the little creatures. Her marveling is cut short by the return of Flip, this time with his cousin Drake. There is a struggle for the tiny aliens which becomes even worse when Flip's mean old dog shows up.

One alien seems to be trying to get the spaceship working again. Kurt loads the rest aboard and takes drastic measures as their foes go after them. He hurls the spaceship into the sky, hoping all it needs is a little momentum to get going. After a bit of a worry, the rocket takes flight  The bullies are too surprised by the spacecrafts flight to take revenge.

Whilst celebrating Kurt notices a bit of ripped clothing leftover from the spacemen. He and Jenna inspect it. It looks like a tiny little flag, made up with red and white stripes... also a blue square filled with white stars. Peculiar! 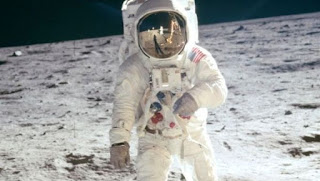 This is a pretty fun take on sci-fi that might just get kids to think about aliens in a different way. So often we think of aliens as either little green men, or scary monsters, like in the movie Alien. What if  they were weak and tiny? This is the first thought. Then of course the twist is WHAT IF WE ARE THE ALIENS? I know, I know, sometimes I criticize a story for having a twist like this. Thing is, I think it kind of works here. It's a little hokey for an adult, but I think it would be more enjoyable for the young.

While the villain in these stories would usually be the alien, in this it is the bullies. I have long supported stories in which it is revealed man is the greatest monster of all. Although I guess the human beings are the aliens... Oh, whatever. What I'm saying is that I like that the supernatural element was not used to be the danger. The danger was in butthead jerk kids. The aliens were used as something that was cool and interesting. It was a fresh feeling change.

Nice that at the end of the book there can still be some stories I would enjoy. I was worried by the end I'd just hate everything and want to die... Maybe I'm just being generous, but I really liked this story.

Rating: 5 human aliens out of 5

Tomorrow is it. The big day. Halloween. I'll be reviewing the final story in 30 Tales to Give You Goosebumps. It's called "The Thumbprint of Doom" and it sounds.... well uhh... not super scary. I mean... a thumbprint? I don't know. We'll see tomorrow I guess.