Strained Peas - 30 Tales to Give You Goosebumps #3 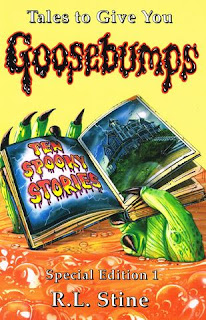 It is October 3rd, which means it's time for Goosebumps short story #3, "Strained Peas." We all know that vegetables may be the greatest horror of all time so I am hopeful. If you haven't read the rest of this month's updates go back to my previous entries and get caught up. If you have, then read on!

Young Nicolas is waiting for his brand new baby sister Hannah to come home from the hospital. To pass the time he's reading a copy of Iron Man wherein the hero battles the villain Dr. Destro (not a real life character by the way.) He knows Dr. Destro from his birth mark, the mark of evil. Why is this an important detail? Well when baby Hannah is brought home Nicolas discovers that she too bares the mark of evil.

But how exactly can a baby be evil? Well for starters she immediately up chucks on Nick. She also stays up all night howling like a banshee. Now you may think this is standard baby stuff but Nick knows the truth. She's evil.

Of course baby stuff can be evil itself, but she was just getting warmed up. As she gets bigger she actually crawls into his room and eats Nick's homework. If blaming it on the dog doesn't work, neither will blaming it on your sister. To step things up she paints all over his parents' room but naturally he gets blamed instead of her!

She doesn't stop. The next day Nick comes home to see the walls covered in green slime! Truly a mark of evil if ever there was one. Mom said it was just strained peas... well strained peas are pretty evil too.The evil only escalates. Next she crawls to nick holding a sharp pair of scissors. She clearly is trying to murder him but NICK is the one in trouble.

Finally though, all becomes clear. A call from the doctor reveals Hannah isn't their baby at all! A mix up at the hospital means that they accidentally got someone else's baby! Firstly, this means there is going to be a hell of a law suit. Secondly this means no more evil baby!

Nick's new sister is named Grace and she's perfect. No evil birthmark, no puke or screaming. Everything is great. Nick even goes in to her room to play with her. A few tickles.  But then Grace does something odd... She threatens to rip off his arm if he tickles her again, and even reveals plans to make sure she gets rid of her brother. AHHHH! 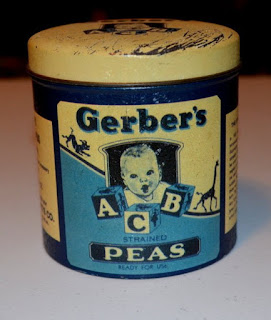 This tale is clearly intended more for laughs than for spooks. The only "scary" action itself is merely the punchline to the joke being set up by the rest of the story. Everything else is all in Nick's head, and I think most readers would realize that, thus making the punchline effective.

I will say though, that trying to think about this from the perspective of an age appropriate reader I think it could hit home with a youngester. How many kids 9 or 10 years old have a new baby in the family that no doubt have thoughts about, not all of them good. I was the youngest child in my family so my siblings probably thought these things about me. This is probably something a lot of young readers can relate to which is a good asset in these tales.

When the new baby was introduced could I see the ending coming from a mile away? Sure. Could a 10 year old see it coming? Maybe. But it was still kinda funny. While not a story that will give you literal goosebumps, it still had its own charm. Plus if you are looking for a unique monster for a story I think he nailed it.

Rating: 3 out of 5 evil babies