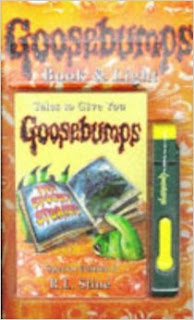 With the completion of this review we will be 1/3 of the way done with 30 Tales to Give You Goosebumps. That means we'll also be done with the original book titled simply Tales to Give You Goosebumps that is contained within the 30 story collection. An what is the tale that will finish it that section off for us? "A Vampire in the Neighborhood." Well I think I get the jist of what the story will be about. Let's see what that vampire has instore for the neighborhood.

Maddy and her 3 friends in sixth grade think the new girl in class is a little strange. She wears the same black skirt every day. She's super pale with black lipstick (or is that just her lips.) Plus, her name is Helga. I think she's probably just goth, but Maddy's friends think there is only one logical conclusion: she's a vampire.

Attempts to talk to Helga have failed. The only thing to do now is start stalking her. They scope out her house but don't find out much information. Of course, no one has ever seen her parents. That's a bit odd.

One day out of the blue Maddy grabbed Helga's hand at school to see if she could feel any life in it. It was unearthly cold. If that is the standard for being a vampire my mom has been one for years.

Time for some more stalking. They scope out her house for the millionth time, but this time Hegla catches them. That's when Maddy decides to be up front. She just asks out loud if Helga is a vampire. Shockingly, she says, "yes." When the group demands to see her fangs, she demands to see theirs first. One by one the kids show her their fangs. Helga is shocked, you see she was just joking. The other kids are vampires but she isn't... yet. She will be soon enough, as the group moves in around her. 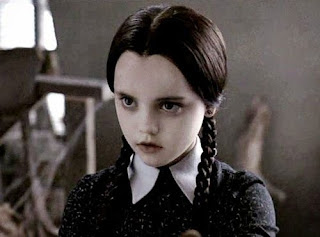 To begin with I've gotta just come out and talk about the twist ending.

The second thing I've gotta say about it is that the details of the things that happen don't line up with it. They deliberately lead you to astray to the point where they are kind of unforgivably misleading. For example, at one point one of the friends starts discussing things about vampires. He says THEY sleep in coffins. Surely if he was discussing a people that he was a part of he would say WE live in coffins. But even that is a little silly because if the people he was telling this to were also vampires they would already know this so it wouldn't need to be said. It would be like if I was looking in at a human's room and I said, "Does she have a bed? The thing about humans is they sleep in beds."

All in all, the twist is kind of like The Sixth Sense for kids, in that at first you might be like "OH GOSH WHAT A TWIST." Then you stop and think about it for a moment you think, "wait, that doesn't make any goddamn sense!"

Maybe a kid won't care if the twist you try to pull off is well thought out, and makes sense with the story you told but I sure do. Can I get salty about a book meant for 9 year olds? You're damn right I can! I know this was a short story shit out for youngsters and hey M. Night Shyamalan got freaking awards for his also stupid twist ending, but this just doesn't work in my opinion.

There you have it. If you have read all my entries so far for October you now have the scoop on the 1994 book Tales to Give You Goosebumps. For some thoughts on that book of short stories as a whole I guess I would say that while they were mostly formulaic and relying on twist endings... so are the full length Goosebumps books, so I guess I can't complain. It is nice to have some short stories that would be good for kids to share with each other. I could see these going over well at sleepovers, camp outs, or perhaps some Halloween reading.

Now onto the next thing. The next portion of my hardcover collection 30 Tales to Give you Goosebumps contains the 1995 sequel to this portion, known ever so creatively as More Tales to Give You Goosebumps. The story I'll discuss tomorrow is "Werewolf's First Night." So help me god if it turns out that all the kids in the story were secretly werewolves the whole time!