Goosebumps #38: The Abominable Snowman of Pasadena 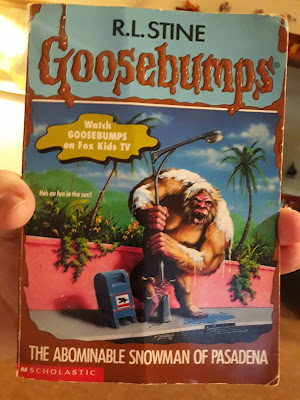 My, my, my it has been a long time hasn't it? Sorry for, you know, completely abandoning this blog for almost a year. I'm back though, so let's get to it.

The Abominable Snowman of Pasadena. Clearly snowmen are not supposed to be in California. You know the only reason I knew about Pasadena existing before this book was the Jan and Dean song Little Old Lady From Pasadena. I guess these are their 2 claims to fame?

So the Snowman is clearly out of his element amongst the palm trees and one wonders where the snow he is covered with is from. You know I always thought Abominable Snowmen were white furred and that is what distinguishes them from their Bigfoot/Sasquatch brethren. Maybe I'm wrong though. This brute is very top heavy. It looks like he skips leg day at the gym but his upper body strength is a site to behold. Just look at that street light! Also he is knocking over a mailbox which I am pretty sure is a federal crime. Not cool buddy, not cool.

You know what is cool though? Finally writing a review for a dang Goosebumps book again. Let's get on with it.

This time around our protagonists are the brother sister team of Jordan and Nicole Blake. Their dad is a photographer who just got back from the Grand Tetons where there was SNOW. Jordan and Nicole are mad jealous because, having never seen snow before, they don't know that it's actually terrible. Dad is developing his photos of the grizzlies. You see developing photos is what old people used to have to do before digital cameras were invented. You had to actually WAIT to see what the picture you took looked like. Crazy, I know. And for some reason all his photos of the grizzlies look like... teddy bears? That rascally Jordan pranked him. There has always gotta be a prankster in this books, always.

Speaking of pranking, in the next chapter the neighborhood bullies unscrewed the Blakes' bike handlebars and put them on backwards. That and a thorough Super Soaking (tm) really got the better of the duo. The grand finale was a rock smashing that turned out to be a movie prop. Surely these villains will never get their comeuppance later on!

Anyway dad gets great news that he gets to go shoot some photos in Alaska for a magazine. The normal babysitter is occupied so the kids get to tag along on a professional photo shoot in the wilderness. What could go wrong? The publication wants shots of a supposed Abominable Snowman but dad is skeptical and is fine just getting shots of the tundra. Booooring.

Cut to the flight in to Alaska. It is a mighty small town they land in and they meet their guide Arthur. He is a true believer of the Snowman and tells tales of people gone missing. He is not real fond of the idea of kids being brought along. Can't say I blame him.

As if to immediately confirm Arthur's feelings about the kids, 2 miles in to their 10 mile trek the siblings are horsing around and one of them falls into a crevice. Damn kids. They stop for the night after arriving late at an old musher's cabin. Not too late for Jordan to plant some fake Snowman tracks though. Dad and Arthur fall for it hard. The old guide flips out. I guess it's a reasonable response if you think something that's been eating all your friends is nearby. Count this as a prank that didn't land very well.

Next morning the sled dogs are scared of something. This makes Arthur doubly scared. Mr. Blake concedes and they head back to the cabin. Later on the dogs get spooked again. That night the kids sneak out of the cabin because they can't sleep and they spot Arthur abandoning them to be eaten by the yeti. Dick movie Arthur. Dick move.

The kids chase him because they are idiots and of course they get lost. They fall into another crevice, scream for help, cause an avalanche, stumble into a strange room, and then find the Abominable freakin' Snowman. He is big, he is scary, and he is... frozen in ice? That seems to be the case, even though fresh footprints lead right to the ice cube. Odd

Can ice stop a snow beast though? No it cannot. The ice cracks and he chases the kids, savagely attacking them, tearing them limb from limb and devouring the corpses... oh wait no, he opens their backpack and steals their trail mix. This is the fearsome monster that made Arthur almost piss his pants?

Once the snacks are gone the monster carries the children outside only to be scared away by dogs. The dropped kids return to the cabin and tell their father about the beast. He has the reaction any good father would have, demanding the small vulnerable children lead him to the huge unstoppable monster. They do it because they are kisd and they are idiots.When they get their the Snowman is back in his ice cube. Father of the year ignores his frightened children's please to leave the beast alone, and instead he decides to take the Abominable Snowmansicle back home to Pasadena. Jordan sneaks some snowballs in the trunk they lock the monster in. Wait a second, how fucking big was the trunk Mr. Blake took anyway? It can fit a whole damn yeti inside? Jesus! Anyway, no life or death situation is so serious you can't pack away some snowballs to throw at your childhood bully.

Back home in Pasadena the kids who couldn't wait to see snow are relieved to be back in the sunshine. Dad has to leave for business and warns the kids to leave the yeti trunk alone. Sound advice. Their friend starts hassling them about the trip and the Blakes quickly spill the beans about the Snowman. Their friend is reasonable skeptical and needs some hard evidence. Immediately they do the one thing their dad told them not to do. But hey, when you got a frozen yeti you gotta show it off. 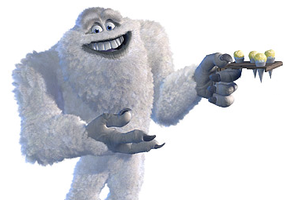 Of course the yeti isn't the only thing in there. They sneak the snowballs out and throw them at their awestruck friend, missing instead hitting a tree. That detail is notable because the snow on the tree starts to spread instead of melt. In 100 degree weather the snow covers the tree and spreads  to the ground. The friend is thrilled to see the snow in Pasadena, because (and I've said this about many characters before) SHE'S AN IDIOT. The Blakes are rightfully concerned. The friend becomes more concerned when she lobs a magic snowball at Nicole and the girl freezes solid.

Trying to thaw her out in front of the oven didn't work. A reasonable solution though. The furnace is a no go too. Then a.... uhh... genius solution comes to Jordan's mind. He'll bribe the yeti with trail mix to warm her up. I fail to see how this could go wrong, so lets do this thing. After taking a bit of time to thaw out, the yeti indeed delights at trail mix. At first he seems to maul the frozen sister but he does indeed thaw her out. Wait... that plan fucking WORKED? You gotta be kidding me! The Snowman even goes outside and rolls around in the new magic snow to get it to dissipate. Then the beast takes his leave. They assume he will travel to the chilly mountain tops, but really it's out of their hands.

There is really one thing left to do. There are 2 of those magic snowballs left, and no yeti to dispose of them. They do the only logical thing and bury them in an empty lot.

Dad is understandable bummed that the Abominable Snowman escaped but takes solace in the fact that his kids weren't terribly mauled. At least he has always got the photos he took. I wonder how those turned out? Well all the pics of tundra and elk turned out fine... but every one he took of the Snowman just shows snow and nothing more. Guess he won't be making his millions.

And that is the end of that.

Oh wait, one of the bullies dug up the magic snowball and threw it at the other bully.

Ok surely I could nitpick this book to death. It is formulaic in the way all Goosebumps are. There are silly solutions to monstrous problems. The trail mix being the key to salvation was ridiculous. There are at times desperate leaps of logic. These are things that seem to commonly plague the series.

There is one major thing I thought could be changed about this book though. The book is called The Abominable Snowman of PASADENA and it is only in Pasadena for like 2 chapters. It is somewhat interesting seeing the kids out of their element in Alaska, and certainly the isolation and wildness of the area makes it quite a great setting for a horror book... but that diminishes the interesting aspect of the "fish out of water" Yeti being in California. To me this book fails to deliver on the premise of its title.

I would like to pitch an altered plot to this book. The kids are at home sweltering away in sunny Pasadena with a broken AC while their dad is out having a wild adventure in Alaska. They receive a cryptic postcard in the mail about some mind blowing discovery. Their father returns soon but is acting strange. It turns out he is the sole discoverer of the world's first yeti, frozen in ice. He spends all his time in his dark room studying it, to the neglect of his children. Oddly, the usually balmy California weather in July starts to plummet. Can you believe that after only a week the temperature is below freezing at night? What ever happened to global warming? One morning the kids discover snow covering the ground outside as far as the eyes can see. And... are those giant footprints in the backyard? It turns out the yeti is on the loose. Their father sheepishly admits he was overcome with the strangest desire and knowledge to free the beast. You see, it is more than just a savage animal that time forgot, it is an arcane beast who brings the tundra with him wherever he dwells, with a thirst to finally be free upon the world again. Only the Blake family know the truth about the frigid weather in the city, and only Mr. Blake with his kids by his side can undo the horror he has unleashed upon Pasadena.

Why is RL Stine a millionaire and I'm just writing shitty blog posts? Life ain't fair! Still though, the book isn't like, absolutely terrible. It's basically on par with your average Goosebumps book. It doesn't hurt to believe it could have been so much more though.

I really intend to write another blog post before the end of the year. At the very least, however, I promise to right another one before next October. 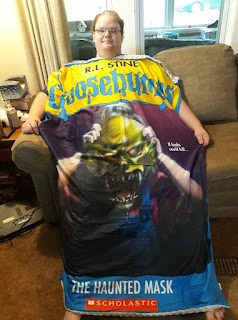 My lovely friends sent me some birthday gifts this summer. One is this awesome Haunted Mask blanket pictured above. Another is the RL Stine book Red Rain. It is a horror book he wrote for adults rather than children. I don't expect to do a full big post about it with a lengthy synopsis and everything, but I do expect to at least drop some brief thoughts and perhaps let you know if it's worth picking up.

Beyond that, I still have a giant pile of Goosebumps to read. I'll try and get to them as soon as I can. thanks for reading and happy Halloween!