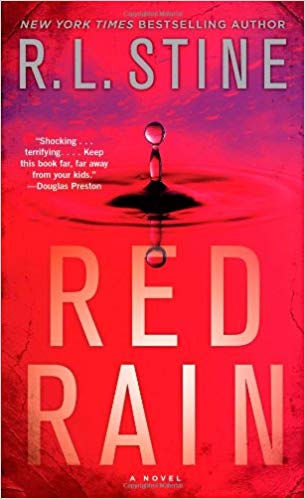 So on this blog I put the title "Reliving the Terror of Youth." That has been the focus, the Goosebumps books I grew up with. Occasionally some other scary book for kids I grew up with gets reviewed, like that one time I did Scary Stories to Tell in the Dark. I have even strayed out into more modern Goosebumps books released recently after I was well into adulthood. So here is a real first for me, I am going to talk about a horror book... FOR ADULTS.

The novel Red Rain was released by Goosebumps author R.L. Stine in 2012. At this point in his career Stine had released literally hundreds of children's novels. Adult novels, however, he had only released perhaps a couple. Still, as he had perhaps reached the apex of his popularity in the 90s, it was maybe quite tempting to write a novel for those kids who loved him back then but had now grown up. Thus comes Red Rain.

Now I am not gonna give a full on treatment I give the kids books. It's a newer book, it's for adults, maybe you guys want to read it without me spoiling all of it. I do however feel like I have a want, nay, a NEED to talk about it.

I will outline the basic premise without hopefully giving too much away. Lea Sutter travels to an island to write about for her travel blog, leaving her kids and husband back home on the mainland. There she experiences a horrible hurricane, devastating the island. Emerging from the wreckage appear to twin boys. Orphaned. They have lost everything, and Lea feels an instant connection. She has an overwhelming urge to adopt the boys. Once home, strange things start to happen. Are these boys as angelic as they seem? (Spoiler alert, no.)

So how does this book shape up? Not well. Even though I love Goosebumps books I think in my reviews I have been the first to admit they are not "traditionally good" books. R.L Stine is not an excellent writer. He gets away with this by writing to children, with fun quirky monsters and villains. His writing style doesn't improve that vastly when writing for grown ups. Sure he can provide a few more details, but his characters are still pretty flat. In fact, I don't think I gave a crap about a single one. He also writes side plots for characters like cops that don't amount to anything. He tells us things we don't need to know and frankly don't contribute.

There is one thing that really weirds me out too. So he still writes in R.L Stine mannerisms. Like clearly is aimed for older people but it still feels very much like you are reading R.L. Stine... then a guy bangs his secretary over his desk and you are like waaaaait a minute. It feels so out of place. It's almost like he uses sex scenes and gore because that is what "grown up novels are supposed to do." It is no substitute for good writing.

But is it scary? No. The antagonists of the story are honestly no more frightening than Slappy the Dummy. They would scare an 8 year old, but not an adult. In fact, the only way in which they are "more" scary is that they are successful in murder, and there is some gore. But there essence is not scary. They spout childish mantras that could have been torn right from the pages of Goosebumps. Think when the Phantom of the Auditorium goes on chanting, "stay away from my home sweet home." They say stuff about that level of "scary" except this is meant FOR ADULTS! You can dress them up a little blood and guts but the reader will still come away from it thinking it seems childish.

Bottom line is, this book may be aimed at adults but if you cut out the gore and sex, and shaved off 300 unnecessary pages this could be a Goosebumps book... just not a very good one. I wouldn't recommend this book to anyone expecting an advanced scare, nor would I even recommend it to adult readers of Goosebumps like myself. An adult can still get a laugh out of Goosebumps, and read it in a half an hour. This book will take you longer and you'll enjoy it less. I'd only suggest it to someone curious, but would advise you to have low expectations.  My real advice is to go reread the Night of the Living Dummy trilogy. It'll take you less time and you'll have more fun.
Posted by Shaun P. at 1:00 AM