Give Yourself Goosebumps #16 Secret Agent Grandma 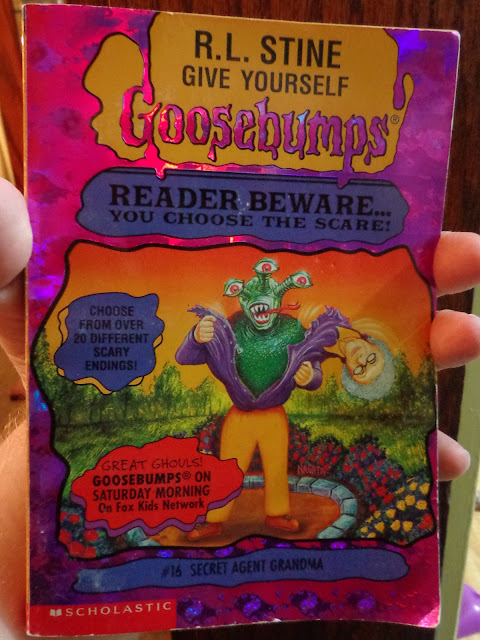 First impressions? This cover is not so...uh... good. The quality just seems poor compared to the illustrations from the main series. I wondered why this was and then noticed that the signature for the book is for "Nagata" where as those in the main series of Goosebumps are all done by a "T. Jacobus." I guess this Nagata just isn't as good? I mean, I like the concept of a gross alien monster thing popping out of a Grandma suit but it just looks bad. I suppose it could look crumby because it's a disguise so the human part looks bad but like... the feet look off. It just doesn't look right. Though really it's not like the alien looks much better. The mouth is kinda coming out at an angle but it looks like the head is sort of looking the other way? And the tongue is just sort of sticking out to the side like Miley Cyrus or something? It seems like it should be going out, not to the side. I'm no artist, I feel like a bit of a dick for criticizing it but it really doesn't seem to be up to Goosebumps standards. Basically I give it a B+ for concept and a D for execution.

There is no front tagline for these books. It just lets us know that there are over 20 scary endings and that you should watch the Goosebumps TV Show. On the back it says "Will the real grandma please stay alive!" I assume it is based on "Will the real ______ please stand up" which may be best recognized by people in my generation as a line from a Eminem song but I am pretty sure was originated on an old game show from the 50s called To Tell the Truth. I feel like A) it's not a strong enough line to go on and 2) It deviates too much from its source (assuming that is the source.) If it would have made sense to say "will the real grandma please stand up?" I think it would work, but the changes hurt it.

Anyway, I'm doing this one special for October, the spookiest month. This is a "Give Yourself Goosebumps" book, so unlike the regular series this one gives you options every so often that you can have multiple stories from 1 book. I'm not going to go through all 20ish possible endings, that would take forever. I'm just going to read it a couple times taking different options and see where that takes me. Hopefully it's interesting!

My parents are leaving for the weekend and have instructed me to take a cab to the train station to meet my quirky 75 year old grandmother. When I get there a call for your comes over the loudspeaker for me. There is a call for me but it keeps breaking up so it's hard to tell. I did make out the words "home immediately" and "danger grandmother." Is granny in danger? Do I go home? Do I try and find her?

GRANNY! I'M COMING! Naturally I'm going to try and find her. A train comes into the station and I"m on the look out for her distinctive yellow pants and purple shirt like on the shitty cover. Suddenly my friends Chuck and Ginny show up. They are off to a hockey games, and I gotta waste my time trying to find my grandmother, oh man. Just then I hear a sound that makes me blood run cold. The sound of my dearest grandmama calling me "Cookie." But wait, what's this? A message scrawled on the train window. It says "Empleh empleh" which is helpme helpme spelled backwards! Then there is a woman who looks just like Grandma inside being accosted by two men in trench coats. Do I try and rescue the possible grandma on the train or do I go with the one who greeted me?

Well I'm pretty sure I know my grandma! And she is the one who greeted me and called me Cookie. We get into the cab and while I'm talking about myself she demands to know about the rose garden. It turns out that she used to live there and planted the eggs herself. Wait, did she say eggs? She must have meant seeds, how silly. She planted them by the light of shooting stars... which seems slightly odd. She seems really intent on seeing them though. We get to the house and the cabbie tries getting the bags out but he is having trouble lifting them. Odd, an old lady carried them just fine. I wonder what is in them? Should I check?

Nah, I'm no snoop! Grandma still seems excited by the flowers. You know, it seems strange, this year they are all over and in some funny colors. Oh hey, some of my other friends are here. Grandma seems interested in seeing them but first she has to freshen up. So I go inside and have some brownies. There is a newspaper article about a meteor shower tonight. Turns out one landed in my yard 15 years ago! Weird. We decide to go look and see if we can find any meteor fragments but grandma is out there. She isn't in her yellow and purple number either, she is in a silver jumpsuit. Seems odd... should I spy on her?

That seems unnecessary I'll just introduce her to my friends. The flowers seem really strange here. There is a green rose and I think it has eyes! And now tendrils are wrapping around me! It spits goo in my eyes. Now I don't have feet, I have roots! Wait what, seriously? That seems rather quick. Oh well. Apparently I am becoming a plant. Meanwhile granny is reciting poetry. What is she saying? "Roses are red, violets are blue, what you didn't know is the rose would be you!" Oh bother. Oh well, Guess I'm a plant now. That's what I get for trusting my grandmother! 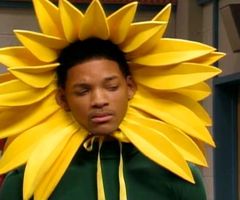 Blah blah parents gone blah blah train station blah blah phone call. This time however, instead of going to find my grandmother I am just gonna get the hell out of there! I run away and fall into a gross mess a garbage truck left behind. Crap. 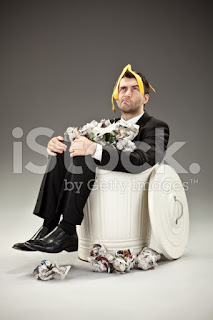 Yadda yadda pick up grandma yadda yadda train station blah blah ok I going to find my grandma this time. My real not turn me into a flower grandma. So I see the "empleh" message and see "other grandma" being attacked by men on a train. This time I'm going to jump on the train to save my REAL grandma dammit! I could look for help, but there is no time GRANNY IS IN TROUBLE! But before I can get to the rescue a train employee demands to see my ticket. I could explain why I'm hitching a ride but adults just don't understand these things.

Well then, I guess it is time to stall. Thankfully my friends Chuck and Ginny show up and bail me out. They claim I am with them and their mom will pay for my ticket when we get to the next station. Then I fill my friends in on my grandma. We go into a car that has a no entry sign. My grandma is tied up in there? But she seems unresponsive! Thankfully she is breathing though. There is a weird orange force-field around here. When Chuck checks it out he gets through back. Heh heh, "Chuck checks", that sounds funny. Anyway we all hide as the door slides open. It's the thugs, but they aren't thugs, they're a rock LOBSTER, Dun dun, dun dun, da da dada daaaaaaa ROCK LOBSTER. Ahem, I mean they are weird lizard monster people. We could try overpowering them...

I think we have a better chance if we wait for them to leave and then try to rescue grandma. The door opens again and in attempts to get a better view I knock over a mirror. Oops! Thankfully they seem to have left so no one heard. In a brilliant plan, we try to use the mirror to disable the force-field. But the lizard-man thugs are back! We'd better hurry. The mirror deflects the force-field beam into the thugs, disabling them! We need to escape with grandma! Escaping, we peep into the window of the next car and it is filled with thugs in over coats! And they have those creepy eyes! They know we are here! We could leap from the train but that seems dangerous...

Lets try waking up Grandma. Not only does she wake up but she informs us she is a secret agent tracking the "Mithra-Dithra" aliens. One must have impersonated her! And she has an assignment for us if we dare. Do we? You're god damned right we do! She is going to go after the impostor and she needs us to track the aliens on the train. What a responsible grandma, sending her grandchild after dangerous aliens. Only, turns out they aren't so dangerous. We show up in costume but all the aliens are doing is having a meeting to discuss galactic parking regulations and taxes. Oh well, at least I didn't turn into a plant. 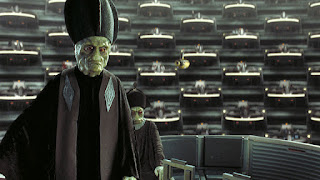 It's hard to judge these books. They are inherently kind of unsatisfying. They boast over 20 endings, but 90% of them are lame. Still, Goosebumps lends itself fairly well to this style. They usually have cliffhangers every chapter so having one with every time you have to make a choice doesn't feel unusual. Also it feels like it gives him a chance to be really weird without having to worry about how good the plot is. You don't really need much of a plot, just twists and turns and boy does Stine like twists.

The other two books I've read from the Give Yourself Goosebumps line were Carnival of Horrors and Tick Tock your Dead. A horrifying amusement park, and time travel open up so many possibilities. Picking up your grandma on the other hand seems more limited. Sure it was taken in weird directions but it felt more like a stretch. It doesn't feel like it had the natural plethora of possibilities that come from a the better premises of those earlier books. That being said, the concept of your Grandma being anything other than a boring nice old lady is intriguing. Alien, secret agent, who knew Grandma got around so much!

Naturally, the longer the plot goes on the more satisfying the book feels. Having an abrupt end like in attempt 2 is nothing but disappointment. Of course as a kid I am sure I read until I got the best ending or maybe even read every single ending. As an adult I am sort of tempted to just read through once and let it be. I suppose reading it a couple times and leaving it at that is a nice compromise.

Basically, I'd just rather read 1 book with a decent plot rather than a book with 20 weak plots. It does give a chance for lots of twists, but it's ultimately unsatisfying. Still, as a diversion from the main series it's alright. I just don't think when people my age look fondly back at Goosebumps "Secret Agent Grandma" is one that is going to stand out in most people's mind.

Rating: 2 out of 5 grandmas

There are 2 more things I want to cover in October, the spookiest month of the year. Firstly, I have seen the Goosebumps Movie starring Jack Black and while I won't do a total in depth coverage of it like I do for the books, I would like to do an entry talking about it. Also, I want to read a Goosebumps book especially for Halloween. Will I be motivated enough to do it? Maybe! Happy October everyone!
Posted by Shaun P. at 7:14 PM