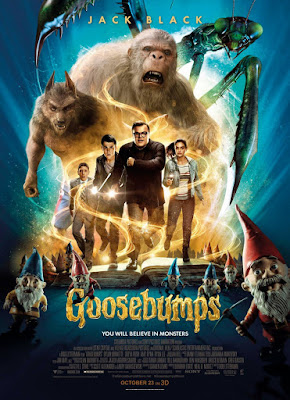 Goosebumps started in 1992. Since then it has seen countless incarnations from the original book series to its many newer series. But not just books, there have been board games, computer games, tv shows, fast food toy tie ins, calendars, stickers, comics and more. Yet even as well as all these things have sold it has never had a movie... until now! Really it is a wonder that it took so long to happen. I can't help but feel like the heyday of Goosebumps was in my youth but here it is, going strong all these years later. 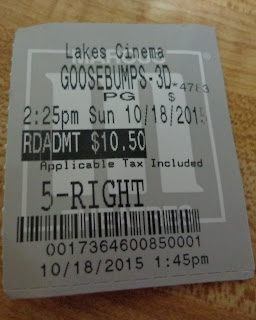 So naturally, I saw the movie. I have started sharing my Goosebumps books with my 9 year old niece and she really wanted to see the movie and I was curious. I had seen some of the old episodes on tv but this has years of CGI advancement and a big movie budget. Plus it was in 3D... which honestly isn't a huge draw for me, but my niece really loves it.

Well I'm not going to go quite as into depth as I do for my books and I'm not going to try and give everything away but there may be some minor spoilers. Usually I don't put a spoiler warning because the books are 20 years old, but this just came out so maybe it'll bug people.

Anyway, the basic premise is this, a teenage boy whose name I have already forgotten and his mom have just moved to a new town. Naturally they have a creepy neighbor, played by Jack Black who seems pretty upset by the boy consorting with his daughter and coming near his property. Well, and this shouldn't be spoilers if you have seen the trailers and such, the neighbor turns out to be none other than RL Stine. Also, the books he wrote can unleash the monsters he wrote about into the real world. Why if one escaped, it'd be madness! Ultra-unfortunately they ALL escape, and they must try to save their city from utter destruction.

So rather than being based an any specific Goosebumps book, it has the monsters from all of them. I think this was a wise choice. Goosebumps are pretty short books and I don't think they are deep enough to stretch out into an hour and a half of a movie. The only except I can think of, is if you did one on Horror Land and based it on it loosely. If you read this blog you'll know I have long praised the possibilities present in a creepy haunted amusement park.

Anyway, I digress. This big CGI Jack Black Movie, does it really feel like a Goosebumps movie? Yeah, kinda. It has plenty of halmarks of the series you'd expect. There are fake scares, people being startled by a hand grabbing them from behind. The main character is generic and relate-able. There is a younger friend named Champ who is more of your typical scared awkward kid. Honestly I thought he was probably the funniest part. Also there are a couple trademark twists that I wont get into. 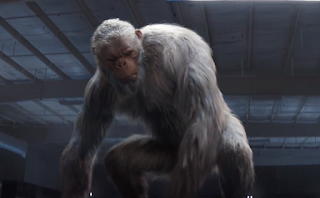 But is it good? Yeah, pretty good! It mixes humor and "horror" (kid horror anyway) pretty well. For example, the first monster we see is the large and genuinely pretty scary Abominable Snowman of Pasadena. A big angry monster anyone would be afraid of. But then, we are treated to the Revenge of the Lawn Gnomes. A much sillier "monster." That takes the seriousness away. It continues on like that with some monsters being generally scary and some being more silly. A good mix. Plus there are fun little jabs that kids may not appreciate. There are some Stephen King jokes. RL Stine the character is pretty defensive of his place in the pantheon of writers. And Jack Black plays a pretty good weirdo. The problem of course is, that I see him as "Jack Black as RL Stine" and not as RL Stine. I can't help but see him as also the guy who is Nacho Libre and Shallow Hal, and not just as the character he is currently playing.

One difference I noticed that may be minor is that the kid characters were high school Aged, probably like 15-16 rather than jr. high aged 11-14. It's small but I think it makes a difference. It is probably wise though, as the slightly older actors are probably better at acting and also I think a wider range of audiences can appreciate a high school setting. It seems more universal and memorable than middle school.

Also, much like Goosebumps there are plenty of logic problems you are probably best ignoring. For example, if RL Stine knows his books can bring monsters to life why not destroy the books? He knows they are a probably, he and his daughter apparently have to move a lot to outrun talk of the problems they have caused. Also, spoiler, the books have this power because of a special typewriter he uses. So... why keep using this typewriter? Why not use a regular old type writer so you don't accidentally unleash horrors on the world? Better yet, use a computer! They are great! You can use different fonts, you can save, copy, paste. Plus there is always porn to look at while you have writers block. The typewriter itself is kind of a problem. Apparently it can't bring just anything to life. It has to be like a "real" Goosebumps book with twist and turns and yadda yadda. How does the typewriter judge? Has he ever written books that the typewriter wouldn't bring to life because they sucked too much? But like the book, these questions are best unasked.

Anyway, really, it's a pretty fast paced movie. It gets into the action pretty quick, but has a bit of heart behind it. There is a bit of a romantic angle that usually isn't present in the books because they skew younger. It fits in with the movie as it's based in high school. It's fun to see so many of the Goosebumps monsters I remember as a kid all rampaging around, but a few tend to be too generic. For example there are Graveyard Ghouls which are just zombies which are everywhere these days. But the giant mantis is a nice touch! The screen his filled with quirky characters like his friend champ, and the main character's aunt who has a thing for Mr. Stine. It's thrilling, it's funny, the acting is decent. It's just enough like Goosebumps to be familiar, but different enough to be a good movie that should appeal to most people.

Rating: 4 out of 5 Jack Blacks 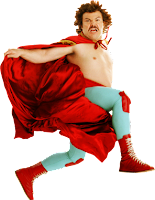 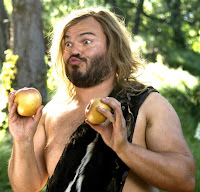 Email ThisBlogThis!Share to TwitterShare to FacebookShare to Pinterest
Labels: goosebumps, Goosebumps the Movie, Movie, The Movie