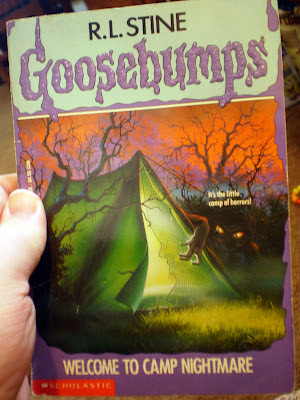 Welcome to Camp Nightmare, I'm creepy shadow monster with bright yellow eyes and I'll be the camp counselor for your stay. Don't mind the massive amount of dead trees they are just a byproduct of the deadly bright red gasses that seem to be infesting our sky. Enjoy yourself!

I don't remember much at all about this book and the cover is not helping. Unfortunately in a series of over 60 books there is bound to be filler. I'm afraid this may be one of those "filler" books, but we shall see, wont we? 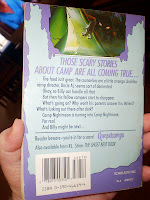 The front tagline reads, "It's the little camp of horrors!" Obviously referencing The Little Shop of Horrors. I'm guessing Rick Moranis will not be appearing in this book. The back elaborates, "Those scary stories about camp are all coming true." The only scary camp story I really remember is the episode of Salute Your Shorts with Zeke the Plumber. If you know what I'm talking about, clearly you're at the right blog.

Now, in to the book!

Camp Nightmare is actually known as Camp Nightmoon, and Billy is heading there on a bus for the first time ever this summer. The bus driver is kind of an odd silent man, who scares the crap out of everyone with a mask before dropping them off in the middle of nowhere and ditching them without an explanation. Then the kids get attacked by wild animals, until they are chased off by Camp Leader "Uncle Al." It's pretty creepy to have an adult of authority force kids to call him "Uncle." But I digress.

They arrive in Camp Nightmoon in a different bus, driven by Uncle Al, who drops the few girls off at a separate camp. The boys all get split up into different cabins and Billy gets into one with a scaredy-cat named Mike. Almost immediately Mike gets bitten by snakes in his bed which proves maybe he has good reason to be a scaredy-cat. He runs off to find a nurse, but quickly discovers from cabin leader Larry that there is no nurse. Uncle Al doesn't believe in "coddling" the children. He also spits in the faces of Child Protective Services. Uncle Al rattles off some camp rules. One is that they absolutely must write home every day. Another and perhaps most notable is never go into the "Forbidden Bunk." Sounds reasonable.

After sleep they are ready to begin their first day of camp shenanigans. First off, Billy goes to play "Scratchball" with a group of boys. Scratchball is like baseball for people who can't afford bats... You just throw the ball into the outfield instead of being pitched to and hitting it. Also, if you are cabin leader Larry to bean kids in the back of the head with the ball because they piss you off, and then claim it was an accident. Then that night they learn camp songs and have dinner. A small food fight ensues and Billy gets grape juiced spilled on his pants, or as the clever kids at camp put it he "purpled himself." When he goes back to his bunk he finds that all of scaredy-cat mike's stuff is all gone. When he confronts Larry about it, Larry acts clueless.

Next on the chopping block are two campers who decide to investigate the Forbidden Bunk despite warnings that "Sabre" will get them. Shrieks in the night signified that perhaps these warnings were correct, and only one of the campers returns sputtering things about a creature. Once again, when Larry the counselor is consulted he acts unconcerned. Later, two campers go for a hike and end up not returning. Larry still doesn't give a shit. Billy however, is getting extremely worried and the addition of 2 new clueless campers to replace all the missing ones doesn't seem to help him.

One day during a swim Billy gets summoned into the woods by Dawn and Dori, two of the campers at the female camp. Turns out strange things are going on at the girl's camp too. This only strengthens Billy's resolve that something has got to be done. Unfortunately for him, the phone at camp is fake, all the letters they've written have been hoarded by the adults remaining unsent, and visitor's day has been canceled.

On the other hand, there is a canoe trip planned for the next day. Lucky for Billy nothing bad EVER happens on canoe trips in the woods. I'm sure his will be just fine... Except that counselor Larry fell off the boat and brave Billy decided he had to jump in after him leaving the two brand new campers drifting away down the rapids... I'm sure they'll be fine. Larry and Billy head back but don't get much time to rest because there is a special hike planned for the next day. Oh boy!

Well the whole camp goes on this hike lead by trustworthy Uncle Al himself. After they get out into the woods he informs everyone that two girls from the female camp have escaped. Then he hands out guns and informs the boys that they are going to hunt them down. For some reason the guys had a problem with that, and Uncle Al informs them they are just tranquilizer darts. Billy however STILL has a problem with it, and is at his breaking point for the whole camp experience. He pulls the gun on Uncle Al and shoots resulting in a tiny pop, and everyone yelling, "Congratulations!" Huh?

It turns out that this whooooole thing was a test. Billy's parents are important scientists and they want to take Billy on their next trip. Apparently to do so there are government tests he has to pass. He passed 1 by not entering the Forbidden Bunk. He passed another by saving Larry. The third test was passed by standing up to Uncle Al. Yes, this whole time the entire camp was in on it. Every single kid, and counselor was acting the whole time and for some reason there is no law against pulling this stuff on your child. Bullshit you say? Well before you call bullshit, it turns out that the expedition the parents are planning is to Earth. Because they are aliens. Yep.

I seem to keep addressing the end of the book first, but how can I not when the endings are this stupid? I guess RL Stine wanted to out-dumb the ending to the last book in the series, and he very well may have done it. It was a double-twist ending, and both of them were terrible. When the original twist of it being a government test was revealed I immediately thought it was dumb. Kids aren't good actors, how could all of them be in on it convincingly? Why would the government allow this to be done to a child? What about that kid that got beaned with the ball? How can you fake that? But then all those stupid questions went away when the alien thing was revealed and a new batch of stupid questions popped up. Why are they on a world where the people look like humans, have exactly human level technology like phones and buses, and all the plants and animals are apparently like ones on earth? Bears, fish, wolves and birds? They even eat Earth food. Billy has french toast. How the hell can you have french toast if there is no France?

My guess would be RL really just pulled this out of his ass at the last minute. I can see him sneaking it in at the very end of the writing process with a shit eating grin on his face. How clever I am! The kids will eat this shit up! Then he rolled around on his bed of money cackling the whole time. Bastard.

It's kind of a shame. Up until the end the book was fairly solid for Goosebumps. Being alone at camp with everything going wrong around you and no adults you can trust is kind of a scary thought. If Uncle Al had some sort of nefarious plan, it could have wound up being genuinely entertaining. Instead we have bullshit about aliens. Disappointing. I'm hoping the Goosebumps series shapes up from here on out.

Rating 1 Spooky Cabin out of 5 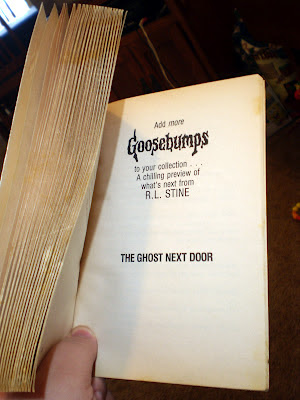 Next up is The Ghost Next Door. Let me guess, the ghost really isn't a ghost, it's a robot. Also it doesn't live next door it is actually sending a hologram of itself up from the center of the earth. Why did I decide to reread these books again?