#8 The Girl Who Cried Monster 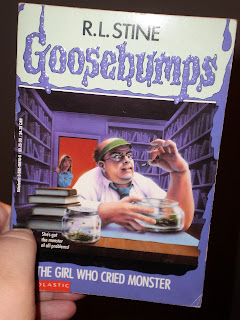 The Girl Who Cried Monster. The name obviously is a play on The Boy Who Cried Wolf, and it leads me to wonder if it will follow that tale at all, or if it just happened to be a clever title. Conspicuously absent from the cover is any monster. All we have is a chubby bald guy who seems to be interested in bugs. Specifically, in eating them. The guy bears a bit of a resemblance to R.L. Stine himself. Coincidence? Probably! But it is still marginally interesting.

The front tagline reads, "She's got the monster of all problems." Get it? Because her problem is literally a monster. Presumably. Not a winner of a tagline. The back one is worse, "She's telling the truth... but no one believes her!" Come on Stine, these are supposed to be clever! Actually, I wonder if he wrote these things himself, or if some marketer slapped em on after the book was done. Something to consider... Ok, enough considering, lets get to the part where I actually read the book.

This book stars the usual 12-13 year old protagonist, this time named Lucy Dark. She has a 6 year old brother named Randy and lives with her family in a place called Genericville. Wait, no, it was actually Timberland Falls where there are no falls and little timber. Lucy is generally an average kid but she has one peculiar obsession: monsters. She loves everything about monsters, especially scaring the pants off young Randy by telling him tales of beasts like the "Toe-Biter."

It's summer time in Timberland Falls, so instead of  going to school she has weekly meetings of the "Reading Rangers." Not nearly as cool as the Rescue, Power, or even Texas Rangers, but it's a way to kill time I suppose. Each week she gets assigned a book and if she reads it at the end of the summer she gets a prize. The one in charge of this is the pudgy librarian Mr. Mortman who is a bit of an odd fellow. He's always sweaty and has a pot with pet turtles on his desk. You'd think he could afford an aquarium of some sort.

After one meeting of the Reading Rangers Lucy forgets her rollerblades and has to come back for them. She feels as though something ominous is going to happen. Guess what? It does! She spots Mr. Mortman at his desk with a jar of flies telling his "Timid Little Friends" that it is feeding time. Then he eats the flies and transforms into a bug-eyed, snake-tongued monster! You'd think on a diet of flies he wouldn't be so fat... Anyway, naturally Lucy's response is to run the hell away. Correct response. Unfortunately she realizes she left her rollerblades there again decides to go back again to get the. Wrong response. Her efforts are thwarted however, because the doors are locked.

Finally she makes it home, and is shocked to find that her parents don't believe her just because she is always telling monsters stories. I don't know why he had to turn this into a "Boy Who Cried Wolf" thing because even if she didn't lie about monsters all the time, what parent would believe their kid that the librarian's a monster?

Anyway, now Lucy has a mission. She has to prove that Mr. Mortman is actually a monster. She met the next week for the Reading Rangers, to discuss the book she read which was of course, Frankenstein and afterwards hid out to see him change again. Just when she thought that she'd gotten it all wrong the first time, he indeed changed into a monster again this time dining on one of his turtles. After escaping this time she tries to convince her friend Aaron of Mr. Mortman's monsterdom instead of trying to convince her parents. This tactic doesn't seem to work though. Also to her surprise when she gets home Mr. Mortman shows up. Fortunately for her it just seems to be to return a book bag she left there. Of course her parents remain ever skeptical.

Her next course of action was to get her friend Aaron to tag along with her and witness Mr. Mortman's change. He agrees only after being bribed with 5 bucks. What a true friend! Not only that, but the bastard doesn't even show up because he's got an orthodontist appointment. Lucky for Lucy, she owns a camera. Unlucky for her she is too fucking stupid to turn the flash off. Thankfully apparently monster eyes are extremely sensitive to light... for some convenient reason, so she is able to escape yet again. And back to the unlucky part... Apparently monsters don't show up on film. Her picture of an empty library does nothing to convince her parents of monsters despite Lucy's assertion that the picture absolutely proves he's a monster, because he doesn't show up. How can you argue with that logic?

Ready for another bout with the beast, Lucy finally persuades Aaron to come with her. This time they follow him home and peep in his window, which happens to be behind a fish tank. For some reason Lucy looks first, and sees him change, then he spots her and she falls on her ass off the wheelbarrow she was standing on. Aaron of course saw none of this because he was looking for a ladder and he ran away as Mr. Mortman came out of his house. Being back in human form he confronts her about what she is doing there. She, as a kid, is a natural born liar and says she was just there to tell him she'd be late to Reading Rangers tomorrow and she takes off.

Since Aaron saw nothing and her parents remain unconvinced her parents force her to go to her book meeting. There Mr. Mortman locks the doors and lets Lucy know that he is on to her and he can't let her go. He turns into a monster and gets ready to devour her, but she puts up a fight and in the scuffle she knocks over the drawer of the card catalog sending cards everywhere. He may be a monster, but he's a librarian dammit so he's gotta organize those cards. Seriously. That's how she gets away. I'm not making this shit up.

It turns out that Aaron sneaked into the library and witnessed the whole thing. One extra child's belief that this man was a monster was enough to sway Lucy's skeptical parents and they only had 1 option. Invite him to dinner. Mr. Mortman showed up skeptical and confused. Eventually he settled in to conversation and asked them what was for dinner. The parents responded, "you are." And then ate him. Because they are monsters. Seriously. That's how it ends. Seriously.

WHAT THE FUCK WAS WITH THAT ENDING? It was terrible! I get the urge to have a clever twist at the end, but that wasn't clever and just leads to so many flaws with the book. It's implied that even the kids know they are monsters. Why would Lucy be so obsessed with monsters then? Why would her patents be so skeptical? Why would her brother be so frightened? Why wouldn't their parents wait to get first hand proof before cannibalizing the bastard? Up until the end it was a pretty run of the mill Goosebumps book but the end just fucking ruins everything. I don't think I can even discuss other aspects of the book because the all I can focus on is the stupid fucking end. Ugh.

I guess I have to dicuss the only other aspect of this book worth talking about. That would be how this is a take off on The Boy Who Cried Wolf. Wouldn't it have been awesomely clever if it turned out that the boy was really a wolf himself? Wait no, that would have been fucking stupid. Ending aside the injection of this fable doesn't really work, because a wolf eating sheep from your flock is a very legitimate threat people would genuinely believe and be angry if you lied about. Your librarian being a monster however is something almost no one would believe, except maybe the fine folks at the History Channel.

In summation. Wow. That ending. That fucking ending. Terrible. 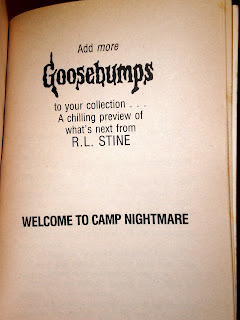 Welcome to Camp Nightmare! I think there were a few books about camp and I don't remember any of them particularly well. Camp however makes for an excellent setting for scary books and telling scary tales at camp is a time honored tradition. Check back next time for my thoughts on this and as always, thanks for reading!
Posted by Shaun P. at 4:56 PM