#7 Night of the Living Dummy 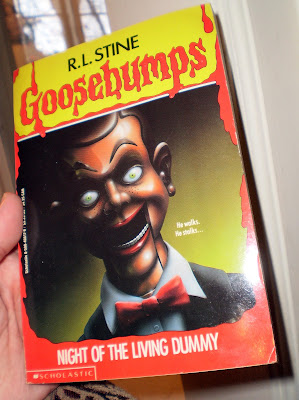 Yikes! This is the first Goosebumps cover that actually disturbs me a bit. Something about ventriloquist dummies is always a bit unsettling and this really captures that and then-some. I'd be pretty terrified if this guy came alive. Plus the tagline is "He Walks. He stalks..." I'll bet he does! Creepy Bastard... 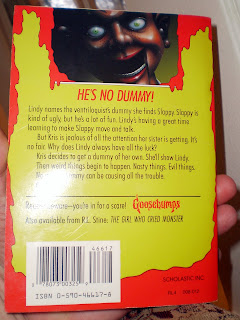 Let's check out the back the back tagline? "He's no dummy!" Ok, that's not very scary or clever, but I'm still giving the cover art an "A" for being genuinely creepy. Those green eyes may haunt me tonight. In fact the back picture where it is all cropped to be just his face may be even more creepy. Bah! Lets get on with it so I can stop looking at this cover and get into the book.

I don't remember a lot of specifics about this book besides the obvious dummy coming to life aspect. I know this spawned several direct sequels so it is probably one of the better books in the series, at least I hope so. 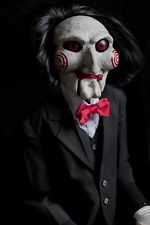 The creepy side of ventriloquism, it's not that hard to see, but Stine does a pretty good job of bringing it out regardless. This one stars twin sisters named Lindy and Kris. The fact that they are twins brings a different dimension to the book. Their sibling rivalry is more intense and more believable as well. It fuels the story.

So one day Lindy and Kris go checking out the house that was being built next door. Perhaps not how I'd spend my weekend, but what do I know? I'm not a young teenage twin girl! Wandering around the empty shell of a house creeps them out. Even little things like squirrels walking around seem freaky under those circumstances... apparently. Lindy finds a garbage can and what do you think is inside? A BABY! Wait no, that's what Kris thought she pulled out. What she really found, however, was a ventriloquist dummy! Almost as odd really. Personally I'd probably be more likely to throw out a baby than a dummy, but that's purely because I have actually held a baby and never even touched a real ventriloquist puppet.

Well, immediately Lindy thought her find was pretty rad. Kris on the other hand wasn't so impressed, she thinks ventriloquism is dumb. Her tune changed pretty quickly however. Lindy named the dummy Slappy and worked up a routine which neighbors gave her 20 bucks to preform. Suddenly Kris realizes the awesome side of puppetry and wants in so she throws a hissy fit to their parents. The ingenious solution was that they should share the doll, which of course pisses Lindy off. It would piss me off too! Here was a perfectly good dummy she stole from her neighbors garbage fair and square and now she has to share? Lame! Dad however breaks down and buys Kris her very own dummy from a pawn shop that was eager to get rid of it. This dolls name you ask? Mr. Wood. We had a puppet in sex-ed class named Mr. Wood, but he was for demonstrating how to put on a c... eh, nevermind. 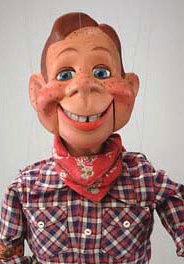 So... Twins. Early in the book they competed over stuff like who could blow the biggest gum bubble, and who or who did not in fact "stink." Now they had worked up to competing ventriloquist acts. Lindy took to it easily and was rather annoyed her sister had to copy her and get a gig performing with her dummy at the spring concert. Kris was a bit jealous that Lindy was making fat stacks of cash off all the neighbors. This seemed to manifest itself in the dummies doing strange things to each other at night. When they'd wake up they'd find them in odd poses, like one strangling the other. One night they woke up to discover that Mr. Wood had taken everything out of the fridge and scattered it over the floor. Mom woke up too, and was pretty darn pissed. Kris on the other hand was scared, what if her dummy really was coming alive? I mean, she had noticed it saying evil things she would swear didn't come from the user. Maybe it was really an evil possessed puppet! Oh no! We've got to do something? Wait, mom is pissed and wants to throw him out? Absolutely not, that's no fair! I want to keep my evil deranged puppet! He's mine and you can't do that! I'll never understand the logic of kids I swear...

After she finally convinces her mom to let them keep the dummies, Kris tosses Mr. Wood in the closet and has a breakdown. She believes she hears it saying, "let me out, let me out." Tears roll down her face. Thank goodness she convinced mom to let her keep him! Unfortunately this puppet may not be possessed after all, Lindy spills the beans that it has been her messing around the whole time. The best way to get revenge on your copycat sister is definitely to assure her years of therapy.


Well this incident wouldn't deter her from working with her dummy. One day while practicing Kris found a note in. Mr. Woods pocket that said, "Karru marri odonna loma molonu karrano." I ran it through google translate but it didn't seem to think it meant anything. Probably best to just say things like that out loud for no reason instead. It's not like it makes a dummy come to life or anything ominous like that! Elderly neighbors came over and were hoping for a show. Lindy preformed wonderfully with Slappy but for some reason Kris's performance with Mr. Wood was all just angry insults. Peculiar... Actually I thought the insult comedy was the funniest bit of the entire book. I guess elderly neighbors don't have a very good sense of humor.

Then comes the big day. The day Kris has to preform for the school concert. She is nervous as you'd expect from anyone who has to preform a comedy routine with an evil puppet. Of course Mr. Blue decides again it is time for insults and heaves them at a heavyset woman who is helping backstage. For a grand finale he pukes green sludge on her. Now that's a showstopper! This girl could have a great act after all. He even showered people in the front row like it was a Gallager routine. 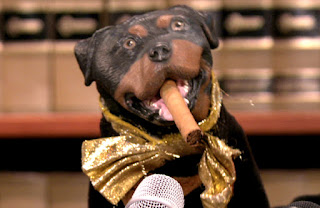 Despite her awesome showing at the concert, mom and dad made her put her dummy away in the closet and they swore they'd bring it back to the pawn shop the next day. Now that they know it can spew bile it's probably worth twice as much I'd say! Kris however awakes in the middle of the night to find Mr. Wood has gotten up out of the closet on his own and is walking around. Running a muck really. He tumbles down the stairs in a fight with Kris and lets her know he is in control now. Of course when mom and dad appear the dummy is asleepy. Tricky bastard. It turns out of course, that all that "Karru marri" stuff from the note in his pocket were in fact the words to bring him to life. They think if they repeat them he'll die, but that's a bust. They are the life bringing words, not the death bringing ones? Oh phooey..

Next came attempts to kill him. Ripping his head off didn't work, nor cutting him with scissors. Instead they locked him in a closet, which prompted him to promise he'd kill one of their family. They burred him in the ground, but he dug himself back out. Haven't these kids ever heard of gasoline and matches? They wrestle with him, and he tries to kill their dog which may be the ultimate dick move. They bring him outside to try and throw him under a steamroller, but he gets free only to flee and get smashed under a different steam roller. Finally, they are rid of him in a puff of rotten green smoke. Rejoicing they go inside to discover that now the other dummy Slappy is alive, and thankfully to be rid of the other dummy. Now this book is over until the sequel!

This is probably the best Goosebumps book so far. It was written in 3rd person, which I prefer. Plus we get to know more of who the characters are in this book. The fact that they are twins makes the reader understand the rivalry which is present the whole time. When the twist in the middle comes that Lindy had been fooling her sister the whole time, we aren't surprised that it did happen and yet weren't necessarily expecting it either. The frustration from the parents throughout was really believable.

Also, there weren't a whole lot of "RL Stine-isms." I don't think he did any "tried to scream but no sound came out" moments. He also didn't overdo the prank scare. Granted there was the big one, but as that was a major plot point it wasn't an issue. I mean little pranks, jumping out from a dark corner of the room or something like that is something he tends to overdo but it wasn't in this book much. The only thing that seemed very Stine-y was their dog. Last book they had a black terrier named Whitey. This time they have a black terrier with an even more clever name... Barky. Terrible. All the dogs in the books before this I'm pretty sure were spaniels which means I am pretty sure he only knows 2 kinds of dogs. Or maybe they are just the only kinds of dogs he's ever owned. Anyway, it's a small point but stuff like that amuses me. Oh, also he name dropped Stephen King in this book, the mom was reading a novel of his at one point and that kind of amused me as well.

Anyway, I thought this book was well written for Goosebumps, it had a decent plot that moved along and characters that didn't seem completely flat. I am actually eager to get to the sequel and see if it picks up right where this one left off or if it starts from a different point in time. We shall see, eventually!

Rating 4 ventriloquist dummies out of 5 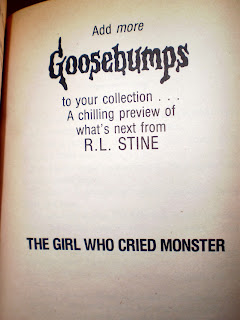 I literally could not remember less about this book if I tried. I knew it existed, the title... That is it. Will it be a boy who cried wolf type story? Probably, there is generally an element to that in all the goosebumps but I think that was just his attempt at a clever title more than anything. I kind of look forward to this book, will I recollect anything about it? We shall see, next time!