Firstly, sorry this is so delayed! Halloween turned into Thanksgiving turned into Christmas turned into New Year's Day and I've been caught up in various things. I try to read 1 Goosebumps book for everyone 1 "real" book I read, but I got a little out of sync with that concept and had a lot of real life stuff going on. I hope I wont leave you hanging as much anymore. Anyways, here we go!


Judging a book by its cover:
Lets get invisible! Why not, it sounds fun? Think of all the awesome things you could do while invisible. Now forget all those things because this is a kids book and that shit wont fly in these pages. You know the main illustration always looked to me like a kid just staring at his hand like, "Wooooah... Dude!" and not much like a kid disappearing. Really he looks shiny more than invisible. 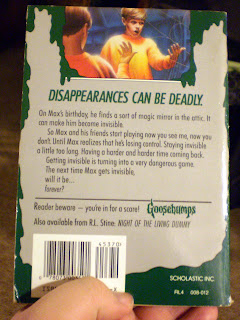 The tagline on the front is, "Now you see him, now you don't!" Which is mildly clever. You associate the line with bad magicians, but it works. On the back it says "Disappearances can be deadly." which is actually sort of intriguing. How exactly can turning invisible be deadly? I suppose it would significantly increase the odds of you being hit by a truck if you frequently walk down the middle of the street.

What is there for me to say about this book? I remember almost nothing right now. I am curious to see if it starts coming back to me as I read it. So far that has been the case with other books, but I've also gone into them remembering at least something. This one leaves me a bit blank. It does seem like there is a lot of opportunity for fun shenanigans. Invisibility opens the door for all sorts of things. Will R.L. Stine deliver this time? LETS FIND OUT!

So this one stars a teen/tween named Max. He has a left-handed brother nicknamed Lefty, a black dog named Whitey, and a squeaky friend nicknamed Mouse. Stine is the KING of naming characters I tell ya. Early on Max has a birthday party that gets rained on so they have to stay inside. After name dropping things kids will relate to, like Terminator Movies, X-Force Comics (the only comic Stine seems to be aware of) and, Super Nintendo games they decide for some reason to go into the attic. Every child's dream birthday party! Up there the dog Whitey accidentally leads them to a hidden room which contains a weird old mirror.

Now it's INVISIBLE TIME! When you pull the chain on the light on the mirror it makes you get invisible. Imagine all the amazing things you could do while invisible. Now forget those things because they don't happen. Mostly what the kids end up doing is competing to see who can stay invisible the longest, because after awhile it starts to make you feel funny. Max starts feeling wrong about it, and regrets doing it. Allegory for peer pressure and drug use? MAYBE!

Of all the kids only Max and his Mousey friend are apprehensive about it. Lefty is kind of a joking jerk who actually wants to use it for pranks, albeit dumb pranks. There is also a friend named Zack who has his hair shaved on one side and grown out long and combed straight on the other. This Rihanna wannabe seems the most set on staying invisible the longest because amazing mystical abilities should always be turned into a stupid juvenile pissing contest. Max however gets less enthused and more concerned as time goes on. After all, they don't understand anything about the mirror, and it could be dangerous. But come on, this is a Goosebumps book, what could go wrong?

Well one night their grandparents come over and Lefty the jokester decides this would be the perfect time to go invisible and raise some hell. Max on the other hand, tries to cover up the shenanigans and drags him back to the mirror to become visible again. The longer you stay invisible, the longer it takes to appear again, and it took Lefty a really long time to come back. Also, something looks wrong about it, but no one can quite say why, though even mom notices it.

A few days pass and Max feels pretty strongly about not using the mirror anymore. He cancels a planned day for all his friends to come over and mess around with the invisibility some more. They show up anyway because Lefty called them and told them to come... but Lefty is gone playing softball. Weird!

So Max tries to get them not to mess around with the mirror but they all kind of goad him into it. Clearly he should have been paying more attention to D.A.R.E. and the war on drugs. Just say no Max! But alas, his friends get him to concede and they try and get record setting times for being invisible. Only his friend Male Rihanna, err... Zack actually does anything interesting while being invisible. He leads them all outside and juggles the neighbors tomatoes while he is out gardening. The guy goes to get his wife to show her, and then the kid stops juggling. Classic. Of course this all takes a long time and eventually Zack stops replying, so they bring him out of the invisibility. Max is worried but Rihanna hair keeps it cool. There is just one strange thing, his hair do seems like it is long on the opposite side now...

Now Max is more resolved then ever to not use the mirror. But his friends want him to, so of course he does. What did I tell you in the last paragraph Max? JUST SAY NO! He is kind of defiant about it and just stays in one place though, so there is that. Around the 12 minute mark he starts feeling very strange like he is being pulled away or something. He winds up in a weird realm with strange faces looking at him and most oddly... himself! Only... his reflected self, you see, he is in the mirror. The reflections have been trying to swap places with the real people. Frank and Erin have already been swapped and Max is next unless he puts up a fight. Guess what? He totally does. He actually manages to get out of the mirror, but Reflected Frank and Erin manage to push him back in. Just then Lefty comes in and throws a softball at Max but it misses and breaks the mirror.

Ah, now everything is back to normal, and Max learned a valuable lesson about standing up to peer pressure. All's well that ends well. Oh wait... Left is throwing Max a ball from his right hand now... DUN DUN DUN!!!!!!!!!!!!

First and foremost R.L. Stine is getting much better at writing in the first person. This one sounds significantly more like it could have been written like a 13 year old than a middle aged man, and I mean that in a semi good way. Of course sometimes you have to chuckle at their speech and really wonder if kids said, "you dork" and "you stink" as much as Stine thinks they did but all in all he doesn't do a bad job.

What bugged me about this book though was the lack of actual things done with invisibility. Zack does make a joke about going to peep on the girls locker room, and he does the juggling in front of the neighbor thing but that is really about it. I know if I was a kid that had just been given gift like invisibility my first thought wouldn't be "lets see who can stay invisible the longest!" That part seemed kind of silly and forced. They should have been doing other things with it. That is really the biggest missed opportunity of the whole book.

Also I wish I kept a spreadsheet of things R.L. Stine mentions. He brings up Super Nintendo a lot, though never Sega Genesis. The only comic he ever seems to mention is X-Force which I believe is a spin-off of the X-Men. And he seems crazy about Schwarzenegger movies. I kind of wonder if these are things he was actually fond of, or perhaps he had a kid that was wild about them, or what. They keep popping up. And while Nintendo is definitely right for the era, the other things could easily be replaced by other things. Why not Batman or Spiderman instead of X-Force? I am interested to see if they keep appearing or if it was just a phase he was in early on.

Oh yeah, and I know I kept pushing the "peer pressure about drugs" moral message of the story, but I'm not necessarily convinced I would have given it a second thought as a kid. Only as an adult did that really pop up in my mind. He's not very heavy handed about given moral messages in these stories, they are more about the fun of fright.

I never really did remember much about this book while reading, though I know I read it as a kid. It's not a terrible entry into the series, but it is pretty forgettable so I'm not surprised. The writing was fairly solid, but the actual story didn't deliver much. The verdict is in. 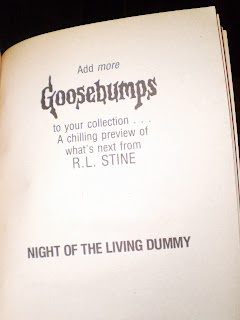 Night of the Living Dummy! I remember this being one of my favorites. A ventriloquist's dummy comes to life and runs a muck. I sort of remember it being like a PG version of Chucky. Will it actually be anything like that? Check back next time and find out! And I'll try and make sure next time is a little sooner. Thanks for reading!