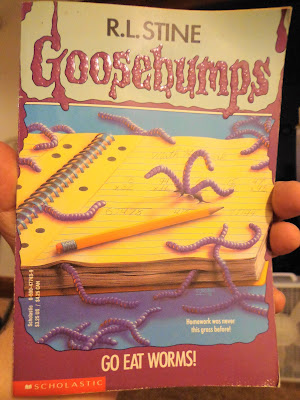 This book appears to feature grape gummy worms that are spilled all over math homework. Someone is snacking while doing their long division! Seriously though, worms don't look like that do they? This doesn't look scary, or even particularly gross despite the tagline reading, "Homework was never this gross before." But anyway, I get it. It seems a book called Go Eat Worms! is going to heavily feature worms. Will worms actually be eaten, or just be handy study aids? Lets find out! 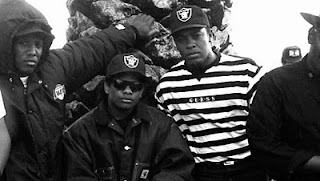 Todd is your average suburban, Caucasian, middle school, Goosebumps protagonist. He plays Nintendo, plays pranks on his sister, and is almost never seen without his Raiders cap. His sister claims, "Only grunges wear Raiders hats." Which people in the 90's totally sounded like. And fans of grunge, or "grunges" totally wore Oakland Raiders gear all the time. That definitely wasn't instead way more of a west coast rap thing... But I digress, Todd is pretty much a regular kid... except for his extreme love of worms. He has a tank he keeps them in, in his basement. Whenever it rains out he can be seen out gathering worms, as that is when they come to the surface. Often times Danny, his partner in crime, would be right there with him. Though Danny doesn't share in the worm love, he loves when Todd uses them for practical jokes. Todd's sister Regina and her friend Beth were their usual targets.

Well Todd had all the more reason to collect worms. The school science fair was coming up and naturally a worm based project is just the thing to win the grand prize of a home computer. So during lunch Todd and Danny went out to their favorite worm digging spot behind second base on the baseball diamond. It was all going well until the earth started rumbling! In a panic they ran in to school to warn everyone about the earthquake but no one else felt any shaking what-so-ever. Curious.

Meanwhile Regina and Beth were having lunch and discussing their science project. They're making a large paper mache robin because apparently that passes for a science project. Unable to resist a chance at bugging the crap out the ladies, Todd bets Beth that there is a worm in her chicken soup. When she agrees to the bet, he drops a worm in her soup, because he is a huge dick. Note to all the young readers out there, this will not gain you many friends.

Back onto the subject of the science fair. It turns out schoolmate Patrick is digging up worms in Todd's favorite spot, because he too has a worm based science project. Two worm science projects? THERE CAN ONLY BE ONE! Todd becomes obsessed with Patrick's project. What is he doing? Is it better than my project? How can he be doing a worm project when I am the worm kid? After pestering Patrick about his project turns up nothing he asks Regina. She doesn't know much either, but she gives him Patrick's address so he can investigate himself. The investigation reveals a devil dog that chases Todd and Danny into an abandoned house with a corpse inside. That is actually pretty scary, except the corpse turns out to be a Halloween decoration. The devil dog goes unexplained. Instead of a hell hound the story returns to worms, and getting revenge on Regina for sending them purposely to the wrong address.

The revenge came at the science fair. Regina and Beth's project named Christopher Robin, the big paper mache bird was getting judged when they noticed something strange in the beak... WORMS! What an unpredictable prank coming from the kid who is obsessed with worms. But things didn't work out too well for wormy Todd. His project was a worm house. A model house built with windows where you can see the worms crawling around. I am not sure what is scientific about that, but it didn't matter because guess what Patrick's project was? A mother fuckin' worm sky scraper. So there! Even a worm sky scraper couldn't beat Danny's project though... a partially deflated balloon solar system. Seriously, that is what won. I suppose it probably won because it was the only one with actual scientific content.

Later, when Todd was squabbling with his sister about the previous happenings he decided to show her
something "cool." He cut a worm in half and showed her how both sides kept wiggling. Then he told her the false fact that both sides will continue to live. They wont. Either one or both sides will die. And now you know!
Regardless, Regina points out that the other worms are watching this worm execution of his. Worms don't even have eyes, but sure, they are watching all right. The worms are angry at his careless worm murder Regina claims...

Then the worms started turning up in the darnedest places. First they were in Todd's "grunge" Raiders hat. Then in his peanut butter and jelly sandwich. And in his math book. He thought Regina was doing it, but some eavesdropping on Patrick made him think it was his doing. Turns out he was just drawing an unflattering comic staring Todd as a worm. Despite all this chaos with the worms, Todd still went out to the baseball field to dig up more worms. There was more rumbling this time, but he learned to ignore it. His worm love, however, is beginning to wain. I suppose that is natural when they begin to turn on you. They even showed up in his bed that night! And Regina couldn't have done it because she wasn't home! In his hot bath to clear up the bed worms, he encountered more worms. Worms pouring out the faucet. Worms sliding down the walls. Worms covering him up, pulling him down into the water. Nevermind, it was a dream. Only the bath worms that is. The rest of the worms were real.

Finally, Todd is determined to get to the bottom of it. He sneaks down into the basement to view his worm tank and wait for something to happen. Something does. His dad goes down there with a baseball bat thinking Todd is an intruder. Understandable upset, dad proclaims that this worm nonsense is over. Tomorrow they are all going to be dumped into the garden. Now Todd will never figure out how they were getting into everything. 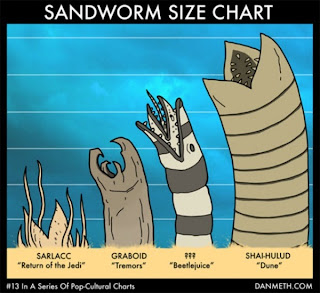 Oh wait. He will. The next day he overhears Regina gloating to Beth about how he'll have to get rid of his worms now. Payback for all the pranks he has played on them with the worms. And Todd was none the wiser the whole time. He was actually beginning to think the worms were actually getting revenge on them. How strange that the whole thing would end up to just be his sister. That's not usually how Goosebumps end up... And it's not really how this one ends because that was a red herring of sorts. Determined to get her back for this, he heads out with Danny to harvest as many worms from the football field as they can. Big ones, little ones. It doesn't matter, he digs them all up. It rumbles some more, but rumbling be damned! Only this time the rumbling resulted in a giant worm the size of a tree trunk bursting out of the ground and wrapping itself tight around Todd, trying to squeeze the life out of him. It just so happened that his sister and Beth were walking by with their large science fair robin as this was happening. It cast a large shadow by the worm which then relented and retreated back into its hole to escape the giant bird. Of course the girls didn't
actually see this, and refused to be scared by his story...

Well in the end Todd understandable lost his interest in worms. He became more interested in butterflies. He would pin specimens into his new collection... Until giant butterfly showed up with a huge pin, ready for revenge! The end.

I really wish the internet could shed some light on RL Stine and ghost writers. Most people assume he used them, because he churned out so many freaking books, but there are no details. I thought about that while reading this because for some reason the first half felt ever so slightly different tonally than other Goosebumps. I can't quite put my finger on why. It had many marks of the standard Goosebumps. There were dream scares, screaming without making a sound, nintendos, average tweens, but still Todd felt a little different. Maybe it was due to his obsession. These characters so rarely get personality traits, but his worm lust helped actually defined him. Was this a ghost written book? Did it come straight from Stines pen? I may never know.

Lets go over some other things about this book. For one, it relied on the grossness of worms far more than "scares." There wasn't any grabbing someone from behind to startle. There weren't a lot of "scary" pranks, mostly "eww worms." The only real scares besides the predictable worm dream and the big reveal at the end were the demon dog and the dead body decoration. The body was pretty good, but the dog felt really out of place. There was a whole lot of relying on people finding worms gross though. Plus the titled delivered, a worm was eaten!

Now the big scare at the end. The giant worm appeared and was dealt with quickly. Many times dealing with the villain or monster or what have you will take a couple (albeit short) chapters. This was over and done with in basically one. Big worm appears, squeeze Todd, get scared away. Because people weren't necessarily anticipating this as the worms appearing everywhere was featured far more than the rumbling it worked pretty effectively. Now naturally the way they got rid of it was kind of silly, but a lot more plausible than a lot of stuff Stine has tried, except for one fact that he already pointed out. WORMS DON'T HAVE EYES! How did it see the bird's shadow? BAM! I just punched a huge whole in the plot of a book for 10 year olds. Eat it RL Stine!

Still though, I enjoyed it. His sister didn't turn
out to be an alien, or a ghost, or a monster, or a robot. He didn't pinch the giant worm to make it go away. It was a little different, and a great deal of fun. The main story was a feud between siblings, with a giant worm thrown in for good measure and how could you go wrong with that? 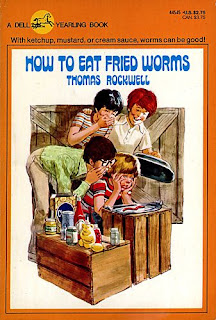 I've never done this before, but I'd like to suggest another book to go along with this. If the notion of eating worms is intriguing to you, after checking out this book perhaps you'd like to try out How to Eat Fried Worms by Thomas Rockwell. It's a book I remember from my youth and though it has nothing to do with Goosebumps or RL Stine, reading Go Eat Worms! brought up memories of this book as well. If you've never read it, give it a shot. 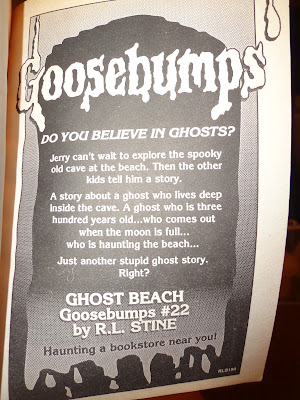 Ghost Beach! Once again, I remember nothing about this book. I swear I read all these Goosebumps as a kid but remembering is hard. I guess they are mostly forgettable. Fun. But forgettable. Will a bikini clad ghost bop a beach ball around? I guess we'll find out next time.
Posted by Shaun P. at 12:44 AM