Judging a Book by its Cover: 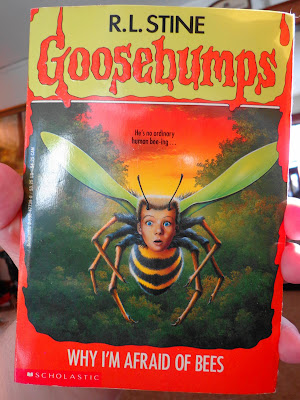 Why I'm Afraid of Bees. Gee, why could it be? Are they Africanized killer bees? Radioactive bees? Giant bees from mars? Oh wait, no, the cover ruins the whole damn thing. Clearly he is afraid of bees because he turned into one somehow. They couldn't just show a swarm of menacing looking bees and leave it to our imagination? They gotta ruin the plot? Lame. Plus I don't think the cover even looks that good. It's overly simple. I did have that exact haircut when I was a kid though. The hair on the head, not on the legs or thorax.

The front tagline asserts that, "He's no ordinary human bee-ing...." while plot spoiling I do appreciate the groanworthy pun. That's what I expect outta you Stine, no more, no less. The back tagline is "Right Brain. Wrong Body." So wait, is it only his brain that gets put on a bee or is it his whole head? Well color me intrigued now! Lets jump on in.

Gary Lutz is a klutz. I am almost positive RL Stine named him Lutz to trot out the clever nickname, "Lutz the klutz." He gets picked last for sports. They even have a special rule when he plays baseball that he gets 4 strikes instead of 3 to even things out. Naturally he strikes out anyway. He is also afraid of everything. The dark, his sisters cat, and bees. Nothing bad has even happened yet and he's already afraid of bees. Why is he afraid of bees? Because he has fears of everything. Story over. Anyway, it's a bad coincidence that he's scared of bees and his neighbor is a bee keeper. Even though he's afraid, he likes to watch his neighbor tend his bees. How does his neighbor respond? By cultivating his interest and turning him into a bee lover? Perhaps a future beekeeper even? Nope, he scares the crap out of him by covering himself in bees. Reasonable adult behavior. I'm sorry BEEhavior. Ah hah hah.

Still Gary is the average tween boy and tries his best impress the ladies. The way to impress ladies when you are a tween boy? Ride your bike with no hands. The way not to impress ladies when you're a tween boy? Almost crash into a car, swerve and hit a lamp post. He went with the latter, and thus was laughed at. At that moment he felt like switching lives with anything that doesn't get laughed at, a plant, a bird, a bug... I bet that's not foreshadowing anything at all.

Shunning the outside world Gary goes inside to use his computer and in my favorite early 90's reference to date in a Goosebumps he signs on to a BBS. Now if you're too young to know what a BBS is, it's a Bulletin Board System. People would log on with their old-fangled dial up modems and post things, play games, download stuffs and so forth. Gary himself was looking for advice on a game he was playing. Instead what he found was an ad to "Take a Vacation From Yourself." Somehow, apparently you trade places with people for a week. This was apparently spam before the era of "male enhancement" pills. He writes down the address in the ad, because surely other lives are better than his bike crashing, getting beat up by bullies, Lutz the Klutz life.

The next day he goes through with it and investigates the company. The worker there informs him that they don't just switch places with people, they actually have a machine that can make you switch bodies! With such an amazing piece of technology, they choose to pander to 12 year olds on a BBS apparently. No secret government work for this. Vacations for 12 year olds. She doesn't even mention price. How are they staying in business? Anyway, Gary isn't sure about it until he gets beat up on the way home. Clearly anyone else's life would better.

After a few days Gary finally gets a call from the body swap folks. Apparently a cool cat named Dirk wants to switch bodies because he needs a smart guy to take his tests for him. He seems unconcerned that perhaps someone is just looking to use his body for a week long binge of heroin and buggery. That's what I'd be worried about. The body swapping lady sets up her machines in the kitchen where it is sure not to attract any attention or questions from his family, and she goes about swapping his body. Unfortunately there were bees in the kitchen that kept freaking Gary out. Soon, he would be freaking himself out, looking at his bee-self in a window reflection. Something went wrong and he turned into a bee instead of into cool guy Dirk! Gary frankly tries to get the vacation from yourself employee's attention, to no avail. He only gets swatted away. His dad swats him away too, and his sisters cat almost eats him. Meanwhile Dirk is busy living his nerd life in his nerd body, buddying up with his new parents. Beekeeper neighbor finally comes and rounds up Garybee with his net. That seems odd, I am pretty sure beekepers don't keep track of each individual bee with such detail. Regardless, Gary finds himself amongst the horrors that are bees up close. Finally he finds his way out of the honey comb and vows to find the vacation place and somehow get switched back to himself.

Trying to talk to people doesn't work, they just hear him as a bee. He tries to type a message to Dirk in Gary's body, on the computer but he turns the computer off before reading it. Then he decides to go to the Person to Person Vacations building and talk to the worker. He doesn't really have a plan of how to communicate, but he'll figure out something. And something he does indeed figure out. She talks from behind a pane of glass using a microphone, so he lands on the microphone and talks to her amplified. Somehow his bee vocal chords can make English, fascinating. Anyway, good news is she understands him. Bad news is, Dirk wants to stay in his body. Apparently there is nothing she can do about that. She vows to think on what to do during the evening, but it's Friday and she wont be back until Monday!

Then Gary visits Dirk's home. Dirk's body's home that is. It, naturally, was acting like a bee and thus was no help. Left with only one choice, he visits Dirk. Dirk in Gary's body. Turns out Dirk can actually understand him due to some bogus sci-fi mumbo jumbo but doesn't care, he's keeping the body for no particular reason. Why he thinks being in this new family is so much better than his old one is anyone's guess, but he's hear to stay. Dirk swats him out the window, and then some bee's start chasing angrily after Gary. They follow him in a swarm, and that gives him an idea. He stirs up the entire hive and leaves them into Dirk's room. Dirk seems mildly concerned, but ultimately not afraid of bees. That's when Gary decided to sting him on the nose! But wait, bees die when they sting people! Oh what a cruel fate... An intriguing way to end a Goosebumps book though with the main character dying in an act of futility...

Nah, just kidding Gary comes to in his own body. It's never explained how that happened. Dirk's back in his body too and for good measure they become friends. Stine's lame endings strike again.

First and foremost, this was an interesting new situation. It's always nice to have new situations to read about in a series so vast. Swapping bodies with a bug is a new and potentially interesting experience. He did spend some time in the hive, but it was mostly confused and terrified which I suppose is accurate. I felt like Stine read a pamphlet about bees and included a few details, but some things I question the accuracy about. I suppose scientific accuracy isn't the greatest concern in a children's scifi-"horror" book though.

Ultimately I had to keep reminding myself that this is a kid's book. They probably don't care that there is no reasonable explanation for Dirk to want to keep his new body and life situation. There is no reasonable explanation why the technology to swap bodies would be kept hidden on a local BBS and used for 12 year olds. There probably isn't a way to come up with a reason, so he doesn't even try. And kids probably don't care. But I suppose part of the fun of reading them as an adult is looking at them with a new elderly attitude.

Strong points include the details from a bugs eye view, the details of Lutz's Klutziness, and the general fun that is had from swapping places with something unusual.

Weak points are the general lack of detail had from everything, and the usual cast of stock family, bullies, and so forth. Also, enough with the trying to scream but having no sound escape. How about actual screaming? That would be an interesting change. 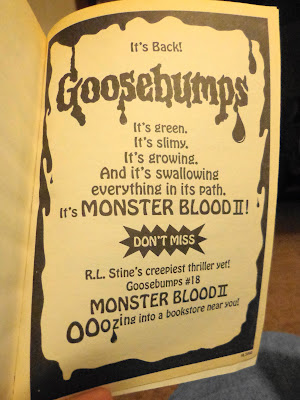 Monster Blood 2: Slimy Boogaloo. I'll be honest, I barely even remember what happened in Monster Blood 1 and I read it just a year or 2 ago. Something about an evil cat-witch and some diabolical silly putty? I am most interested in seeing if this follows the same Characters as the last book, or merely introducing someone new to the Monster Blood. We shall see!