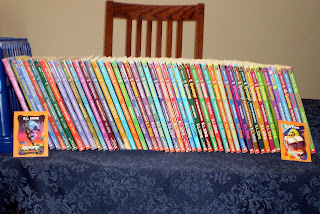 So here it is, my Goosebumps collection. I have books 1-39, 41, 42, 48, 54 of the original series. I am pretty sure there were about 60 original books and I didn't ever have every single one of them but I am pretty sure I owned #40. I am not sure why it isn't in with the rest of y books but I am almost positive I owned it and that it was Night of the Living Dummy III. Though a lot of these series is really foggy in my mind I kind of remember that book as being sort of the end of my enjoyment of the series. I stuck with it a little past that one but didn't feel compelled to get every book after it. That book in particular just seemed to exemplify the "more of the same"ness I had been feeling about the series.

Besides the original series I also have #1, 2, 5, 10 of "Give Yourself Goosebumps" which was a side series they had towards the end that were "Choose Your Own Adventure" style books. I am really not sure how many of these they ever made.

Also, while it isn't officially connected to the series I have one "Gooflumps" book. It was a parody series of Goosebumps made by an author who called himself "RU Slime." Clever, right? Again, I a not really sure how many there were and while I remember these books existing I remember very little about them.

Oh, and there were 2 cards in with these. They appear to be some kind of "trading card" that basically just has a picture of a book and random junk about them. I assume they came inside one of the books or something but I really don't know. These books were enough of a collecting job in their own right. I don't know if they really thought kids were going to collect cards on top of that?

So a few thoughts before I delve into the series more and actually look things up. One thing that strikes me is how utterly uniform the entire series is. Not just in the logos, layouts, cover art and whatnot but even just in size. They all seem to be almost exactly the same length, or at least book thickness. It makes me wonder how formulaic they were. I mean it goes without saying that these kind of books are going to go by a formula but to be so precise in length? You gotta wonder if Mr. Stine ever hit 100 pages and was like "oh shit, I gotta wrap this up."

Also, wouldn't RL Stine be the absolute best puzzle answer for the final round of Wheel of Fortune? I mean, you get RSTLNE as free letters, you could nail that shit.

And now I've looked up some actual facts!

So apparently the original series ran from 1992 to 1997. I would have been 7 when it started and 12 when it ended. I probably started reading when I was about 8 or 9. There were 62 original books. That is a pretty impressive output. The "Give Yourself Goosebumps" series I've already mentioned had 50 books (8 of which were "special edition" books and I have no idea what the hell that means.)  These were made from 1995 to 2000. Jesus Christ. With these 2 series alone this man wrote over 100 books from 1992 to 2000.

Shall I go on? Well lets see, he wrote 8 collections of short stories that went under the titles "Tales to Give You Goosebumps" and "Goosebumps Triple Header." The former I vaguely recall existing but never read. The latter I had absolutely no idea about. 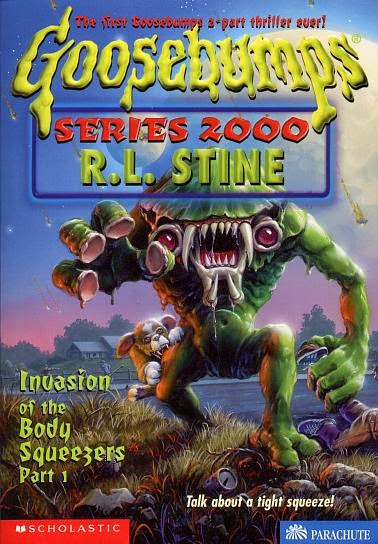 Apparently from 1998 he made a "new" series of goosebumps books called "Goosebumps 2000." I think what happened was when he "finished" the series in 1997 after a few months he thought to himself, "You know what I miss? Paychecks." There were 25 of these made and I absolutely don't remember that these existed. Their covers look pretty intense though...

After this I guess there was a planned series called "Goosebumps Gold" that never happened for some reason. And now? Well apparently there is a new series still going on called "Goosebumps in Horror Land" that started in 2008 and has 20 or some books already.

Anyway, even though all these series exist, I only plan on focusing on the Goosebumps books I owned and read as kids. I may try and flesh out the end of the original series collection with trips to the thrift store but who knows. I also wouldn't be opposed to visiting the newer series, but first things first.

So now that I have this out of the way it's actually time to go through the books one by one to read and discuss them. I have no idea how often I'll get to update the blog but ideally at least once a week I'll be posting. So check back soon for my entry for Goosebumps Book 1: Welcome to Dead House.

(Did I mention that RL Stine apparently also wrote books under the pen name Jovial Bob Stine? Makes sense, that is one jovial looking dude.)
Posted by Shaun P. at 4:18 PM